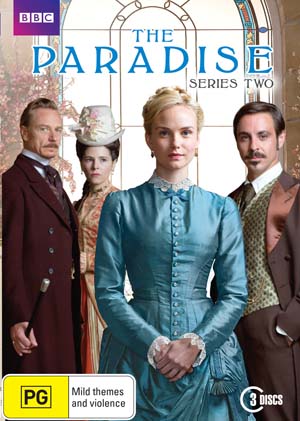 The BBC’s lavish soapy costume drama of life and love in England’s first department store returns for a second series. Perhaps not quite as good as series one, it’s still an enjoyable watch.

Continuing on from Series 1, the former owner (now manager) of the Paradise, Mr Moray, and the love of his life, shop assistant Denise, come face-to-face with a new series of challenges. The death of Lord Glendenning, owner of the Paradise, sees his daughter (who happens to be Moray’s jilted fiancé) and her new husband becoming owners, causing much strife for Moray. We are also introduced to the scheming owner of a rival department store, who wants to buy the Paradise. Add into this the usual mix of human drama, including marriage, mind games and secrets.

It’s all very entertaining in a slightly over-the-top sort of way. As with series one, the stereotyped characters are often allowed to grow beyond expectations and you can’t help but care about them. Production values are suburb and costuming is gorgeous.

The Paradise: Series 2 is definitely worth a watch. It’s a real pity that it has not been renewed for a third series.

The DVD release is disappointing, with no extra features.  🙁

The Paradise is released on DVD in Australia by Roadshow Entertainment.