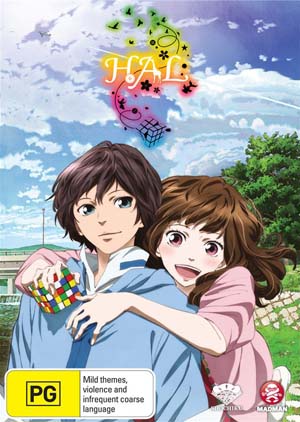 HAL is an amazing Japanese animated film. It’s a science fiction story about love, grief and redemption. It’s a difficult film to classify and it’s hard to review it without spoilers, but here goes…

A robot is given human appearance to help a young lady deal with the death of her boyfriend. The robot is given the likeness of Kurumi’s boyfriend Hal and then sent to her as a form a therapy — an attempt to help her with her grieving process so that she can get on with living her own life. That’s the premise. But what follows is so charming, heart-warming, beautiful and completely unexpected. I don’t know what else to say other than this film was nothing like what I assumed it would be. I loved it!

The animation, while not as lush as a Studio Ghibli film, is nonetheless beautiful. Like so much Japanese animation, it has an ethereal, lyrical quality that is captivating. The production as a whole is excellent. The music is lovely. The direction of the animation is superb, with some really interesting shots. And the English language voice cast are great.

At 60 minutes, it’s a short film. But it’s the perfect length for the story. Given the current trend for longer films, it’s nice to occasionally encounter one that doesn’t try to extend the length beyond the requirements of the story.

The DVD release is very good, with some ‘making-of’ stuff and trailers. There’s also an excellent commentary with the ADR director and some of the English language cast.

Hal is released on DVD in Australian by Madman.