DVD Review — The Adventures of Tintin 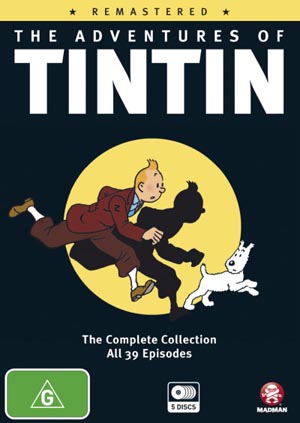 I’ve never read the famed Tintin comics by Hergé. And I’d never seen the series prior to getting this DVD set. Coming to it with very little prior knowledge, I found myself completely engrossed in The Adventures of Tintin. This series is a French/Canadian coproduction made in 1991/92, and its remastered released is well timed, given the cinematic release of the new blockbuster Tintin movie.

Normally, when I sit down to watch and review a series, I’ll religiously watch all the episodes in order. Not so, this time around. My watching of it has been rather sporadic after the first couple of episodes. The reason? My eight-year-old daughter loved it so much that she was watching the series at every available moment, even when I wasn’t around. And being her father’s daughter, she just HAD to watch them in order. So whenever I had the time to sit down and watch an episode, she would watch with me, and we HAD to watch the one she was up to. 🙂

I was very pleasantly surprised by this action/adventure series about young reporter Tintin, who constantly finds himself in one adventure after another. It is well-written, exciting and moves along at a cracking pace. The animation style is quite lovely for a television series, not at all rushed or limited in appearance. While some of the characters are definitely caricatures, the series still manages to get in a reasonable amount of character development over the course of the 39 episodes.

What I liked best about this series is its old-fashioned approach. Even though it’s for kids, it never talks down, nor does it sanitise (as so many kids’ television shows do today). Tintin regularly gets put in danger and even gets hurt; and he has to deal with all manner of criminals, from mobsters with guns to drug runners. And alcohol is not shied away from either, with one of the characters even being a bit of a drunk. Although, from what I’ve been told, the violence and alcohol have been toned down somewhat from the original comic books.

The series has been remastered for this release. The picture and sound quality are great. Unfortunately, as with some other remasterings of old television shows, the aspect ratio has been altered to fit current wide-screen televisions. Which, of course, means that some of the picture has been lost. It’s not something that I found particularly noticeable — there are no heads being cut off or anything like that. But being a purist, I prefer to watch things in their original aspect ratio. I feel that cropping the image to change it into widescreen is disrespectful to the original material. A big thumbs down for that decision.

Disappointingly, there are no extra features on this release. Even though the earlier DVD release from a number of years ago had a few minor extras, they have not been included here. 🙁

The Adventures of Tintin is released in Australia by Madman.