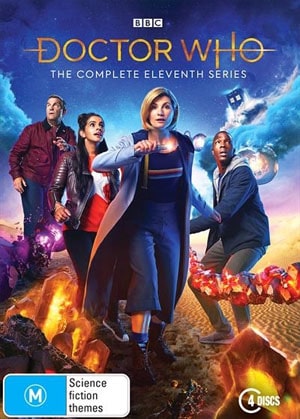 A new Doctor. New companions. A new TARDIS interior and a new sonic. A new showrunner and a heap of new behind the scenes people. Welcome to the fresh new series of Doctor Who.

Series 11 sees Jodie Whittacker step into the role of the Doctor, the first time that this regenerating Time Lord has been played by a woman. She is vibrant, exuberant and joyous in the role, bringing a wide-eyed excitement and wonder to it. She grabs it immediately and makes it her own. I embraced her in the part from the get go. She is, without doubt, the Doctor!

Her three companions are Ryan, his childhood friend Yas, and his step-grandfather Graham. The three of them work well together and it’s really good to see a return to the original dynamic of Doctor plus three companions, as in the first season of the classic series. All three actors do well in the roles, but it is Bradley Walsh who shines as Graham. His performance is layered and subtle, and he has a likeable presence.

There is a lot about this season that harks back to the origins of the series. Three companions. Historical stories that educate as well as entertain. Simpler, stand-alone stories without convoluted season story arcs. Even the new arrangement of the theme tune and the accompanying opening titles feel like a homage to the original version (albeit with a contemporary twist).

The season overall has two over-arching themes — family and the concept of evil. Family is explored through the companions, as well as through characters in particular episodes – even extending to incidental characters. The idea that evil isn’t always obvious is explored in many of the episodes, with ordinary people sometimes being revealed as the true evil, rather than the aliens or monsters.

It all feels familiar… but fresh and new at the same time. This is the magic of Doctor Who. Its greatest asset. The ability to change dramatically and yet, in essence, remain recognisably the same series.

Now let’s take a look at the individual episodes.

“The Woman Who Fell to Earth”

“Bit of adrenaline, dash of outrage, and a hint of panic knitted my brain back together. I know exactly who I am. I’m the Doctor. Sorting out fair play throughout the universe.”

This episode is a great introduction to the new Doctor and the new season, but it’s also a great introduction to the series overall. You don’t need to know much about Doctor Who to enjoy it and be taken on an entertaining journey. As the story introduces the new companions to the Doctor and her life, so too it introduces the viewers. In that sense it is very reminiscent of “Rose”, the first episode of the revived series.

This episode gives us a premise not unlike Predator, but with many Who-ish touches. The Doctor spends much of the time a bit mixed-up because of her regeneration, but that moment where she finally realises who she is and what she does is GOLD! But my favourite part is where the Doctor constructs her new sonic screwdriver. A lovely touch in this episode (which is followed on in subsequent ones), is giving bit-part characters a few moments of characterisation/history before allowing them to be killed off. The granddad security guard and the salad dude were both so well handled. Moments like this make viewers care about the deaths. And while we’re on the subject of deaths… Sharon Clarke is amazing as Grace, Graham’s soon to be late wife.

My favourite thing about this ep is the way it subverts expectations… right from the start. Ryan’s vlog, which opens the episode, momentarily made me wonder if I was watching the right show. But as you watch, you’re expecting him to be talking about the Doctor. It’s not until the end that you realise it’s someone else. Also, the guys in the van who collect the cocoon. The situation makes you think there’s something sinister and that they will be bad guys… but then things are turned around. The lack of opening titles and the fact that we don’t get to see the new TARDIS interior are also part of this.

While this ep is not the strongest of the season, it is a good, solid start.

Okay… so the killer bandages are a bit naff. And the killer robots’ shooting skills are on par with the Star Wars Stormtroopers. But aside from that, this is an interesting story with a great look and feel. The idea of a space race, with participants being eliminated as if in a reality show, worked really well. All the guest cast were excellent, but it was Art Malik as Ilin who stole the show with his all too brief appearance. There is an interesting hint of what you expect to be a season arc with the mention of a ‘timeless child’, but this is never followed up (more subverted expectations). Perhaps it’s something that will re-emerge next season.

This is the first of the historical episodes, visiting the formative moment in history where Rosa Parks refuses to give up her seat on a segregated bus. So many powerful moments in this ep, and it’s all handled with a great deal of sensitivity and respect. Vinette Robinson is remarkable in the role of Rosa Parks. She needs to get some sort of award for it. I loved the concept of small things giving history a nudge and causing big changes. And that scene where the Doc and friends must remain silent and not interfere is AMAZING! Heartbreaking, but amazing. Although a serious story, it does have lighter touches, with the Banksie moment being very funny. The villain of the piece, future racist Krasko, is rather blandly acted. He is the only weak point in what is otherwise a superb bit of television.

“Arachnids in the UK”

Oh dear… as an arachnophobe I found this one to be waaaay freaky. The spiders are… well… BIG! Combine this with some humorous political commentary on Trump and the US (“Why don’t you do what normal people do? Get a gun, shoot things, like a civilised person.”), a spot-on performance from Chris Noth as the sort-of, not-quite villain, and some lovely character moments (“Oh, my God. It got Kevin. I have no more Kevin.”), and you get a pretty entertaining ep that unfortunately falls apart at the end.

The main plot, concerning an alien creature with a silly name that is eating its way through a medical spaceship, is fairly ordinary. But the sub-plots and the characters is where this episode shines. There is a wonderful theme of family and gender roles played out through two stories. Out of a great guest cast, it is Suzanne Packer as General Eve Cicero who really shines. The Doctor also gets a fab little monologue about the wonders of anti-matter propulsion…

“It’s beautiful. Anti-matter powering the movement of matter. Bringing positrons into existence to move other forms of life across space. I love it. Conceptually, and actually.”

“Demons of the Punjab”

Okay, so this ep made me tear up. It’s got my vote for strongest episode of the season. It’s an historical story set during the partition of India. I particularly loved how the big, wide-reaching historical events were the background for a small and personal story of direct significance to one of the TARDIS crew. The aliens work well as part of the plot and are another example of subverted expectations. The whole thing just comes together so beautifully.

OMG! The bubble wrap did it! How wonderfully meta! Years after bubble wrap being used to portray the monsters (I recently rewatched “The Ark in Space”) the bubble wrap has become the actual threat. What a stroke of genius. And the company with the exploding bubble wrap is called Kerblam. 🙂 This is a good, solid, entertaining story.

“Together we shall save the souls of my people from Satan. Even if it means killing them all.”

“The most evil witch in Christendom. And she would call herself the Doctor.”

Unfortunately the story doesn’t end all that well, with its logic-leaps and not wholly convincing alien threat. The Morax are not as effective as they should have been and their dispatch a little too easy; and that’s what lets the episode down, making it the weakest of the historical stories.

“It Takes You Away”

This episode is packed full of gloriously out there ideas, some great character moments and real emotion. The idea of a sentient universe is particularly fascinating. This ep also gives closure to Graham’s character arc regarding the death of his wife. The frog at the end has been a divisive element, with fans vocally denouncing or defending it. I thought it worked well, with the slightly unrealistic quality emphasising that it’s not a real frog, that it is a construct based on the thoughts of human being; while also harking back to many an unrealistic creature from the classic series.

DOCTOR: Every action has consequences.
TZIM-SHA: And these are yours, Doctor.

This is a good story that ends the Tim Shaw arc begun in the first ep. There are lots of great moments (including Graham’s “Yipee kai ya”) but my fav is when Graham tells the Doc he’s going to kill Tzim-Sha, an act of revenge for the death of his wife.

My only disappointment was that, as a season finale, it didn’t wrap up the thematic arc of evil not always being the obvious monster. Tzim-Sha was the obvious monster. Although I did like that it was the Doctor’s actions in the first ep that resulted in his evil getting a wider, more devastating reach. So it does bring a closure to the season, linking it to the “The Woman Who Fell to Earth”.

All up… there are no stinkers in this season. A good solid set of episode and a few standout brilliant ones.

I’ve found it really interesting how some people are complaining about this season being too political and too socially aware. But that’s exactly what good science fiction does. It holds up a mirror to society and makes comment. It’s something that Doctor Who has been doing all its life. I recently watched the Season 12 classic series box set (read reviews), and those stories are full of political and social commentary (unions, terrorism, sexism, etc) that was reflective of the time. And I’ve just watched “Kinda” from season 19, which is a damning, far from subtle, statement on British colonialism.

In terms of the box set, it’s a rather ordinary release. No special packaging. A bunch of fairly ordinary, short extra features. There are commentaries with cast and crew on four of the episodes. While all of them are interesting, the only one with any real spark to it is “Demons of the Punjab”. There are too many silences and a lack of chemistry between the participants.

My biggest disappointment with this box set is the fact that the New Year’s special, “Resolution”, is not included. That story really does work as part of the season as a whole, and in many ways is a more fitting conclusion to it. But it’s been released separately. 🙁

Doctor Who: The Complete Eleventh Series is released on Blu-ray in Australia by Roadshow Entertainment.