‘Twas a big day today. I had fungus extracted from my ear and an award nomination announced. Exciting times!

As I was sitting in a specialist’s office, getting a fungal infection vacuumed out of my ear (whilst watching the entire disgusting affair via ear-cam on a large flat screen TV), the REAL shortlist was being announced. It is the second of these two events that I’m excited about. I actually could have done without the fungus. 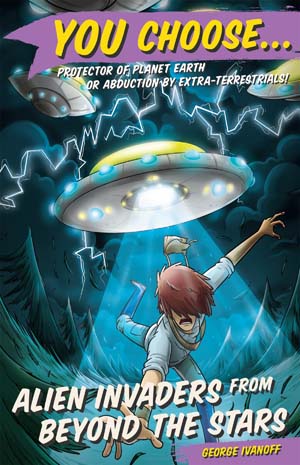 Last year, You Choose: The Treasure of Dead Man’s Cove made the REAL shortlist and then won a YABBA. So it is super exciting to be back for a second year in a row, with You Choose: Alien Invaders From Beyond the Stars making this year’s shortlist in the category of Fiction for Younger Readers.

[insert lots of shouting and high-fiving and happy dancing]

I am excited and flattered and honoured to be among the amazing books on this year’s shortlist. The other books in the Fiction for Younger Readers category are:

Check out the full list for each category and go read some books.

Cover reveal for YOU CHOOSE 9 & 10 DVD Review — Doctor Who: The Complete Ninth Series