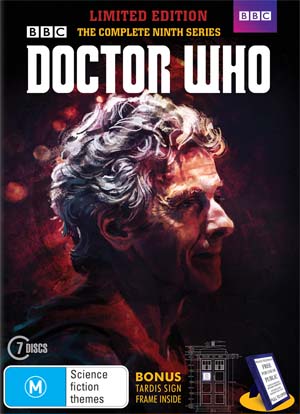 Capaldi’s second season as the Doctor sees the series head to new heights. In my opinion it’s the best season in years. And the DVD release matches it in quality. In fact, the complete ninth series DVD box set is actually more than that, as it also includes the preceding and following Christmas specials. So let’s get into it…

I’ve previously reviewed the 2014 Christmas special, “Last Christmas”, so if you’d like my opinions on that, go check it out.

The Christmas special ended with the Doctor and Clara being able to travel again, unencumbered by the heavy emotional consequences of the Series 8. Overall, this gives Series 9 a slightly lighter feel, at least initially. The Doctor is no longer pondering whether he is a good man, and Clara has accepted Danny’s death and moved on… ready to have adventures with the Doctor and to enjoy life, albeit with a little too much eagerness in the risk-taking department.

This season sees the return of two-part stories, allowing for greater depth of plot and more character development. What’s really interesting is that these two-parters are more than just one story cut in half. They include stories that lead into other stories, flipsides of a coin and the disclosure of events leading to the story in part one.

There is a grand scale to this season… but personal issues. I like that.

“The Magician’s Apprentice”
An excellent opening to the season with Missy and the Daleks. Michelle Gomez is perfect as Missy, especially the bit where she proves that she’s still bad. The inclusion of Davros as a child is pure brilliance. There is so much for die-hard fans to get excited about in this ep, including the appearance of old school Daleks and the reference to the multiple versions of Atlantis history as seen in Classic Who.

“The Witch’s Familiar”
A good follow-up for “The Magician’s Apprentice”. The pairing of Missy and Clara works so well and the Doctor’s conversation with the grown-up Davros is riveting. There are some nice nods to the past (putting a companion into a Dalek casing, just like in the first ever Dalek story), some very funny lines (“The only other chair on Skaro.”) and some great concepts (“Exterminate” as a way of reloading). On the downside, we have sonic sunnies (really don’t like this) and the idea that the Doctor can just use his regeneration energies at will (yes, I know it’s been done before… didn’t like it then, either).

“Under the Lake”
This is a spooky and intriguing ep, with a great cliff-hanger. And a fairly straightforward plot…. something you don’t get all that often in nuWho these days. Loved the cue cards!

“Before the Flood”
This ep opens with an electric guitar version of the theme… which ROCKS! I wish they had kept it for the rest of the season. I know some people don’t like #12’s guitar leanings, but I reckon it works well (and is certainly less annoying that #2’s choice of instrument). This is an excellent conclusion to “Under the Lake”. Taking the story back in time, it gives us the set-up to the problem encountered in the preceding ep. The design of The Fisher King is uber creepy and wonderfully threatening. There is an interesting reference here to the “Minister of War” that is never followed up on. I can’t help but wonder if it’s a Moffat set-up for a future encounter.

“The Girl Who Died”
Set in the days of the Vikings, this is a fun, enjoyable ep with a cool premise and some great character moments. Much was made in publicity of Maisie Williams from Game of Thrones, guest starring as Ashildr. I thought she was okay. Yes, there are some historical inaccuracies, but there are so many magic moments. We finally get an explanation for #12’s face and there is some polarity reversal action (a major squee moment for Pertwee fans). And the ending twist leads into the next story with one of the most beautiful shots in Who history, showing the passage of time from Ashildr’s perspective.

“The Woman Who Lived”
I liked this episode, but felt it was a little hampered by some pedestrian direction and overplayed slapstick. Ashildr, the titular girl who died, is now back as the woman who lived. While Williams’s performance as a young girl in the previous ep was adequate, she lacks conviction in the more mature role it has now become. The highlight for me was the Doctor’s relationship with Ashildr, how she responded to immortality, and why the Doctor didn’t take her with him.

“I didn’t know that your heart would rust because it kept beating. I didn’t think your conscience would need renewing, that the well of human kindness would run dry.”

“The Zygon Invasion”
Loved it! This episode felt like old-school Doctor Who with a NuWho pace. It was great to see the return of the Zygons (Who’s best alien design), Osgood (even though she died last season) and Kate Stewart.

“The Zygon Inversion”
An absolutely perfect follow-up to “The Zygon Invasion”, the two combining to make what is, for me, the highlight of a super strong season. This is dramatic, relevant science fiction holding up that oft talked about mirror to society, while still managing to retain a sense of fun. The climactic scene with that incredibly powerful speech from Capaldi is GOLD. So many nods to the past — some fun (“Five rounds rapid”) some rather character-changing (oh Harry, not just an imbecile any more, you’ve shown a ruthless streak).

“Sleep No More”
Lots of people had lots of hate for this episode. I beg to differ. It isn’t perfect, but I thought it was an effective and interesting ep. I loved the ‘found footage’ approach (something a bit different for Who), but thought the concept needed a little more explanation. I also thought it needed a little more attention to detail regarding the height of the camera for POV shots. I loved the ending and the fact that, in effect, the monsters win.

“Face the Raven”
This is a fascinating story in and of itself, with its Trap Street and alien refugees, and the return of Rigsy from Series 8’s “Flatline”; but is somewhat overshadowed by Clara’s demise. Her death is handled perfectly. It is her own fault, a result of her over-confidence and her belief that she could be like the Doctor. But she faces the consequences head on, leaving as one of the bravest companions, walking forward to meet her destiny. And the effect her death has on the Doctor, is what drives the remainder of the season.

“Heaven Sent”
I love it when an established series takes some risks in terms of style and approach. We see this earlier in the season with “Sleep No More”, but this ep does something even more daring — it give’s us Capaldi’s solo performance. This one-man-show approach demonstrates what an extraordinary actor Capaldi is and what a flexible series this can be. This is an intriguing, personal and mind-blowingly dark story, which leads directly into the finale. The revelation of the Doctor’s thought processes is genius – that his supposedly spur-of-the-moment, often haphazard actions are actually carefully planned and considered. The Gallifrey reveal at the end, while not unexpected, is quite thrilling. This episode’s music is also worth a mention — it has a particularly good score.

“Hell Bent”
Wow! Possibly the best season finale of nuWho. I love it for what it isn’t. It is not some OTT battle to save the Universe – something that has become the standard finale. It is a personal battle with universal consequences. And much as I hate Moffat’s tendency to kill characters and then bring them back to life, I do think this is a very fitting end for Clara’s character and for her relationship with the Doctor. We also get a resolution for so many things, including an unexpected hybrid reveal (but notice how the Doc doesn’t deny being half-human) and an explanation as to why Missy got the two of them together in the first place. My only qualm is Clara and Ashildr running off together for some adventuring. I would have preferred Clara to return to her death straight away. But there is so much to love about this ep, including the classic TARDIS control room, the way-creepy Sliders, the Gallifreyan General gender-swapping regeneration and the new sonic (love the cheesy yet absolutely wonderful sonic catching moment).

A strong, very effective season. And then we have the 2015 Christmas special…

“The Husbands of Rive Song”
This is an odd ep. Part comedy/chase; part River wrap-up. The plot is daft and guest star Matt Lucas is super annoying, but the chemistry between Capaldi and Alex Kingston is great. It’s the two of them — their banter and the development of their relationship — that saves this episode. It is a perfect end to the River Song arc, bringing everything back to “Silence in the Library/Forest of the Dead”. A poignant and bitter-sweet ending.

Lots of great extras on this release. In fact, in addition to the little bits and pieces on each disc (including Doctor Who Extra web snippets, the season prologue and “The Doctor’s Meditation”), we have a whole extra disc with the 2015 San Diego Comic Con panel, an interview conducted by Wil Wheaton and a batch of deleted scenes. And there are commentaries…

“Under the Lake” & “Before the Flood”
Commentary with Sophie Stone (Cass), Toby Whithouse (writer) and Derek Richie (producer)
It’s an interesting commentary with some wonderful insight into the writing and making of the episodes, but it’s not sparkling.

“The Woman Who Lived”
Commentary with Maisie Williams (Ashildr) and Derek Ritchie (producer)
A fun and interesting commentary. These two obviously get a long rather well.

“Sleep No More”
Commentary with Mark Gatiss (writer) and Reece Shearsmith (Rassmussen)
The highlight commentary. These guys are off-screen friends, which carries through to a comfortable and candid conversation. And they have a barrel-load of fun doing this commentary. Informative, insightful and very entertaining. Love the ‘cosplaying Babylon 5’ comments.

The packaging of this 7-disc set is worth a mention. A standard plastic case, enclosed in a cardboard TARDIS sign box, which then fits into a cardboard slipcase. It all looks rather lovely. But… the TARDIS sign is meant to be removed, as it unfolds into a little standee of the Police Telephone box sign. Great, except that once it is removed the plastic case no long stays in the outer slipcase… it now just slips out. Whoops!

All up, this set is pretty brilliant. A great season and a great release. A must have!

Doctor Who: The Complete Ninth Series is released in Australia by Roadshow Entertainment.