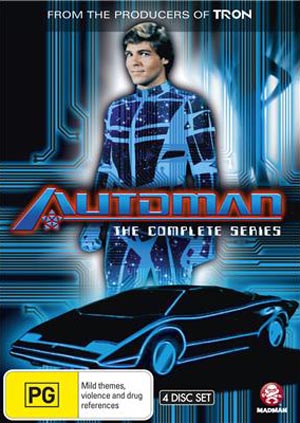 If, as I do, you like an extra helping of cheese with your retro 80s sci-fi, you simply can’t go past Automan. This 13-episode series from 1983/4 is a barrel-load of ridiculous, over-the-top FUN!

Police computing expert Walter Nebicher creates a crime-fighting artificial intelligence program that manifests itself as the hologram called Automan, complete with whiz-bang, glowing, blue, starfield outfit. Automan is assisted by Cursor, a mischievous little hologram that can create all manner of holographic vehicles for his master (autocar, autoplane, autocopter, etc), whilst also providing comic relief. Along with seasoned police detective Lt Jack Curtis and rookie Roxanne Caldwell, they go about solving all manner of crimes from drug running to murder. Walter and Roxanne are the only two people who know what Automan really is. For the benefit of everyone else, he poses as government agent Otto J Mann.

Automan was created by Glen A Larson, the man behind other 80s genre tv shows such as Battlestar Galactica, Buck Rogers in the 25th Century and Knight Rider. Trying to cash in on the feature film TRON (which was a box-office flop at the time, so one wonders why they did this), Automan attempts to mix the real world with the computer generated, in a time before CGI special effects. Given this is an 80s television series, the effects are actually pretty good, using traditional animation to create ‘computer graphics’.

The series is super cheesy in every way possible, from the way Automan poses every time he appears (accompanied by organ music) to the often lame humour; from the OTT acting to the corny dialogue. I suspected Larson was in on the joke… after all, the second of the two episodes he penned is called “Staying Alive While Running a High Flashdance Fever”. The dialogue often makes no sense at all, which adds to the whole experience. The epitome of ridiculous dialogue is the conversation between Walter and his creation in Larson’s pilot ep…

Automan: You must be Walter Nebicher.

Walter: How did you know that?

Automan: It’s on the programming you fed into my system. I must say, Walter, you’re very good. Very good, indeed. I look wonderful.

Walter: If you do say so yourself.

Automan: You programmed me to be honest, but tell me: Why did you call me Automan?

Walter: It means that you’re the world’s first truly automatic man. You can do anything because you’re not real.

Automan: Oh, but I am. I’m as real as you are; just different. And thanks to you – perfect.

Automan: That’s not true, Walter. You’ve programmed me to observe other people and do whatever they can do as well as they can do it. Jimmy Connors playing tennis. John Travolta dancing. In fact, on a scale of one to ten, think of me as an…eleven.

The world’s first automatic man? What the hell is that supposed to actually mean?

Chuck Wagner is wonderfully cheesy (yes, I know I’m over-using that word… but really, I don’t have any other alternative) as Automan, delivering his lines with a wide-eyed innocence and exuberance that is perfect. Desi Arnaz Jr is overly earnest as Walter, sometimes bordering on irritating. Heather McNair is very natural as Roxanne, over-coming the often dumb-blonde dialogue she’s given. Robert Lansing lends gravitas as the seasoned detective, and Gerald S. O’Loughlin is suitably irascible and over-the-top as the police captain.

An interesting array of guest stars parade their way through the episodes, including Patrick Macnee, Richard Anderson, Lance LeGault, and even pop star Laura Branigan. Playing a singer whose life is in danger, Branigan gets to lip-sync some of her contemporary hits (accompanied in one scene by Automan on his holographic guitar) while failing to set the acting world aflame.

I loved this show as a kid. One of the things I loved most was the Autocar (it’s a Lamborghini Countach LP400… and I wanted it more than the Pontiac Trans Am from Knight Rider) and particularly its ability to make 90-degree turns. I thought it was hilarious the way Walter would always end up thrown against the windowpane each time the Autocar made such a turn. Watching it now as an adult, I just marvel at the fact that Walter never uses a seat belt.

This is a great 4-disc DVD set, including an excellent retrospective doco, “Calling Automan”, which includes interviews with cast and crew. It’s quite a wonderful insight into the making of the show, and how the cast and crew approached it. There are also some reasonable text-based extras providing further info.

Final verdict: Cheesy FUN! (And I still want that car!)

Automan is released in Australia on DVD by Madman.

Note: Now, if only Madman would release that other super cheesy Glen A Larson series, Manimal. I live in hope. 🙂