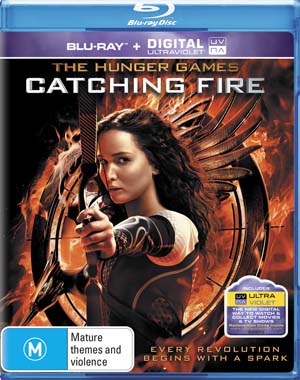 The second film in the blockbuster series, based on the best selling dystopian YA novels by Suzanne Collins, is… well… a blockbuster. Big and spectacular, it is also intelligent and personal. Building on themes and events of the first film, Catching Fire is, in my humble opinion, the better film.

Having survived the original Hunger Games, in which tributes from the outlying districts are forced to combat each other to the death until (theoretically) only one is left standing, Katniss and Peeta have become celebrities. Of course, not everyone is happy with their system-defying joint victory, and they soon find themselves in a new game of survival, as well as potentially inspiring a rebellion.

This film has all the action, adventure, intriguing backstory and character development that made the first one such a good film. The relationship between Katniss and Peeta is particularly well developed, as is Effie’s growing attachment to them. This film also comes with a couple of advantages. It’s missing the inconsistencies and lapses in logic that plagued the first. And, one assumes due to the change of director, it has ditched the OTT shaky-cam that made sections of the first film so irritating to watch.

The production design and costuming are again amazing. The returning actors are all excellent in their roles, with the new additions being well cast. Philip Seymour Hoffman is particularly good in the role of Plutarch Heavensbee. His quiet, underplayed performance is a study in subtlety, with his motives never obvious until the very end. His scenes with Donald Sutherland as President Snow are a pure joy to watch.

As with the first film, I went into this one without having read the books. I did buy copies after watching the first film, but decided to hold off reading them until after all three books had made the transition to the big screen, lest my reading of them detract from my viewing enjoyment. My wife assures me that the novels are way better and she thought this film didn’t quite do justice to the book. It’s interesting to note that this film is more violent than the first. And while the scope of the story has increased (with new characters and a potential rebellion), it also remains personal in its focus on Katniss — a delicate balance.

The film is stunning on Blu-ray. Not just the visuals, but also the sound. Truly awesome!

The release is good, with a commentary from the director and producer, and a number of extras (although not as many as on the release of the first film) including featurettes and deleted scenes.

I am now eagerly awaiting the next two films (the final book has been split in half). But the wait may prove too much… I just may crack and end up reading the books. 🙂

Don’t forget to also check out my review of The Hunger Games.

The Hunger Games: Catching Fire is released on Blu-ray and DVD in Australia by Raodshow Entertainment.

More YOU CHOOSE revelations And so it begins…