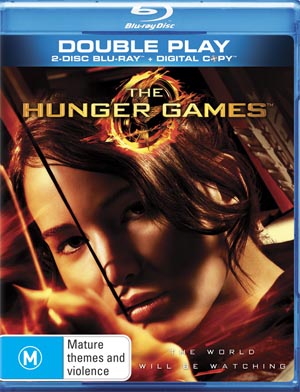 From YA novel to big-screen blockbuster, The Hunger Games has been a sensation every step of the way. Perhaps not as brilliant as the marketing would have you believe, it is nevertheless an entertaining film that is well worth a watch.

Let me start off by saying that I have not read any of the books in The Hunger Games trilogy, so I am approaching this film purely on its own merits.

The Hunger Games is set in a dystopian future where a corrupt government controls outer lying areas with a human tribute system. Each district must provide two young people (one male and one female) to compete in the annual Hunger Games — a survival contest in which only the one winner gets to live. The story follows the experiences of 16-year-old Katniss Everdeen from District 12 and her male counterpart Peeta Mellark.

Despite the enormity of the events, the story takes a personal approach with Katniss as the focus. It is well-paced, exciting and intelligent, faltering in only a few places. Early in the film, much is made of the potential danger of dying from exposure and hunger/thirst in the upcoming ‘game’. But when we actually reach the game, it’s all ignored in favour of more directly dramatic threats. There are a couple of lapses in logic – Peeta’s camouflage make-up out in the wilderness, for example. The ending is a little flat in its obvious set-up for the second film. Despite these problems, it is still a compelling watch.

It’s an interesting future world that has been created, with the poverty-stricken districts and the opulent Capitol. The design is quite amazing with the OTT fashions of the Capitol citizens contrasting with the imposing architecture, and this, in turn, starkly contrasting to the low-tech grim design of the districts. It is indeed a very good-looking film.

I’m pleased that I ended up watching the whole film. Yes, I very nearly didn’t. The hand-held, shaky-cam style that it was shot in was so excessive and irritating in the early part of the film, that I almost switched off. Thankfully it settled down a bit, and by the time it ramped up again I was emotionally invested in the story and characters. It’s interesting to hear director Gary Ross’s reasons for this style of shooting, in the behind-the-scenes doco. I can see what he was trying to achieve, but it just didn’t work for me.

The film is peopled with interesting characters and equally interesting actors. The young leads are all well-cast in their roles. But it was two of the adult cast that really stood out for me — Donald Sutherland’s quietly menacing and authoritarian President Snow and Woody Harrelson’s Haymitch Abernathy. Harrelson’s performance is particularly layered and subtle as he shifts from an uncaring drunk to a man with a purpose.

The Blu-ray release is excellent, with loads of extra features to keep you watching for hours after the film is finished. The behind-the-scenes material is interesting and thoroughly covers the entire film-making process. It is a little repetitive and there are moments where it sinks into a self-congratulatory love-fest as everyone gushes about how wonderful everyone else is. But on the whole, great stuff!

While I really enjoyed this film, finding myself already looking forward to the next instalment, its lasting impact on me was to instil the desire to read the book. In fact, after finishing the film I immediately hopped online to order the box-set trilogy. 🙂

DVD Review — Doctor Who: The Greatest Show in the Galaxy Launch Videos