DVD Review — Doctor Who: The Greatest Show in the Galaxy 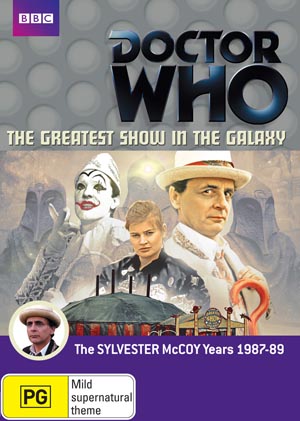 “The Greatest Show in the Galaxy” is a really interesting four-part story from Sylvester McCoy’s era as the Doctor. Lots of fascinating ideas and concepts are thrown around, but the end result isn’t all that great.

Originally screened in 1988/89 as part of the 25th season of Doctor Who, “The Greatest Show in the Galaxy” sees the Doctor and Ace lured to the Psychic Circus by some futuristic junk mail. The Doctor, along with a motley collection of other visitors, is tricked into agreeing to perform in the circus. Too late, the Doctor realises that it’s a trap and that those who fail to entertain the mysterious trio in the audience are killed. There is, of course, more to it all than first meets the eye, and the Doctor soon finds himself up against an ancient force.

This story is, all up, an odd mixture of things that work and things that don’t. On the plus side you have some great production design, some atmospheric lighting, truly creepy clowns and an awesome final explosion. On the negative side you have some poor visual effects and numerous story moments that just don’t work — the ease with which the Doctor is fooled and the silly bit at the end with the sword, being chief among them (there are others). The romance between Bellboy and Flowerchild is a nice touch —something you don’t get all that often in classic Who.

The guest cast and their characters are also a mixed batch. Ian Reddington is unnerving as the Chief Clown and T P McKenna is gloriously pompous as The Captain, while Gian Sammarco’s wide-eyed fanboy Whizzkid is amusing. But Jessica Martin’s lacklustre performance as Mags, combined with an awfully unconvincing transformation, result in a rather ineffectual werewolf.

“The Greatest Show in the Galaxy” certainly isn’t the worst story of the McCoy era, but it is most definitely not the best. It’s a story that had many behind-the-scenes problems and that might account for the final product, which I feel could have been so much better with a little more care and attention.

The DVD release is excellent, with lots of extra features — my favourite being the excellent making-of doco, “The Show Must Go On”. And the commentary, with numerous cast and crew, is certainly entertaining and informative.

Doctor Who: The Greatest Show in the Galaxy is released on DVD in Australia by Roadshow Entertainment.