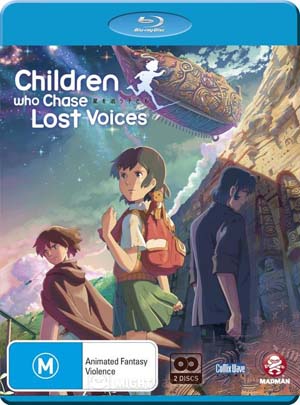 Children Who Chase Lost Voices (aka Journey to Agartha) is a Japanese animated film with an unusual story and touching characters. It is as much a piece of art as it is a film.

There is a mysterious world beneath our own — the land of Argartha. Legend has it that in that land the dead can be retrieved. When schoolgirl Asuna Watase meets a boy from that world, she begins an adventure. Teaming up with her new teacher, a man obsessed with bringing back his dead wife, she embarks upon a journey into Argartha — danger, adventure, discovery and enlightenment ensue.

There is action, adventure and violence in this story. But it is also a spiritual story about the connection between the living and the dead, and about the interconnectivity of all creation. It’s a thoughtful and thought provoking story. I was left pondering the meaning of it all, long after finishing the film.

The animation is beautiful and quite haunting — and the hi-def clarity on Blu-ray is breathtaking. The English voice actors are excellent, delivering their lines with a subtlety that compliments the animation. And the music by Tenmon helps transport the viewer into this other world. Everything about this film is entrancing.

The film is written, directed and produced by Makoto Shinkai, the filmmaker responsible for such other critically acclaimed animated films as The Place Promised in Our Early Days and 5 Centimeters Per Second. I’ve not seen any of his other films, but after watching this one, I intend to seek them out.

The Blu-ray release comes with a DVD of extras, including interviews and behind-the-scenes material.

Children Who Chase Lost Voices is a hauntingly beautiful film with a thoughtful and intelligent plot. Well worth watching.

Children Who Chase Lost Voices is released on Blu-ray and DVD in Australia by Madman.