DVD Review — Doctor Who: Scream of the Shalka 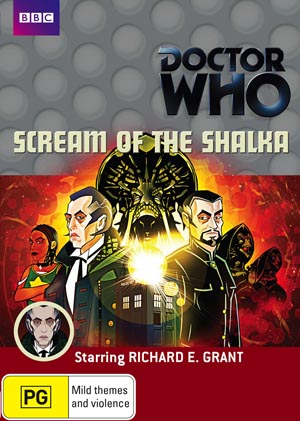 Richard E Grant as the ninth Doctor? In a cartoon? That’s right! “Scream of the Shalka”. It was an animated webcast produced for the 40th anniversary of Doctor Who back in 2003. With the 50th anniversary happening this year, it’s the ideal time to finally release this intriguing piece of Who history on DVD.

“Scream of the Shalka” is a six-part, animated web series, although the episodes are shorter than their television counterparts. It introduces Richard E Grant as the ninth Doctor, and was intended as the first story in a new animated web series. But a new television series was given the go-ahead before this story even went online, dooming this particular version of Doctor Who to a single outing. The new series gave us Christopher Eccleston as the ninth Doctor, and the Grant Doctor was relegated to a ‘what might have been’ non-canon status. But as an odd bit of parallel Whoniverse history, it makes for interesting watching.

The Doctor lands in a small English village in 2003, where the streets are deserted and scared citizens stay indoors, trying hard not to make any noise. Deep underground the alien Shalka are preparing to take over the Earth by conditioning strategic groups of people to scream — a very special scream that will sonically manipulate conditions on Earth. The Doctor teams up with barmaid Alison and U.N.I.T. to put a stop to the scream of the Shalka.

It’s a good story, well paced and plotted, with some top-notch dialogue, particularly from the Doctor…

“I’m here under duress. Remember that, Major. Don’t you ever offer me a gun again.”

“Tell me honestly — am I irritating you yet?”

“I don’t like the military, but I have so many friends in it. I say I do not kill but then I exterminate thousands.”

The characters, particularly Sohpie Okenedo’s Alison, are engaging. But it is, of course, the new Doctor who dominates. This alternative Doctor has been criticised by many for being too dark and moody, and Richard E Grant has been criticised for a flat performance. I disagree on both counts. I loved the dark edgy Doctor with all his emotional baggage, and the way he slowly comes round and becomes more accessible by the end of the story. And I thought Grant did a superb job with it. Having said all this, however, my favourite performance is from Derek Jacobi as the Master. It’s a relatively small role, but he does so much with it. And he also gets some great dialogue…

“Why did I choose continued existence? Listening to him being right all the time when I had the option of a slow, painful death…”

What really makes “Scream of the Shalka” exceptional is the back-story. Something has taken place in the Doctor’s recent past, making him withdrawn and keen to avoid human companionship. This same event has also resulted in the Master joining the Doctor as his travelling companion — but it’s not the Master as we have known him… he’s now an android, and unable to leave the TARDIS. Fascinating stuff!

Also fascinating are all the parallels between “Scream of the Shalka” and nuWho. An event from the Doctor’s past that has scarred him. A young woman who has to choose between her boyfriend and travelling with the Doctor. The Doctor using a mobile phone. An alien device embedded in a human’s forehead. Derek Jacobi as The Master. The list goes on and on.

“Scream of the Shalka” uses fairly limited Flash animation specifically designed for fast Internet downloading back in 2003 (when the Internet wasn’t all that fast). But it is quite stylised and stylish — a bit like an animated comic book — with wonderful use of colour to enhance the mood of a scene, and some really nice production design (I particularly like the TARDIS interior with its elevator)

This is a great DVD release with loads of extras. There’s an excellent commentary track with Toby Hadoke doing one-on-one interview style commentaries with writer Paul Cornel, director Wilson Milam and executive producer James Goss, on individual episodes. There is an in depth making-of doco which looks at all the problems this production was faced with, some behind-the-scenes stuff about the recording sessions and a doco about the Doctor Who website for which this story was made. A highlight for me was the inclusion of a soundtrack featuring Russell Stone’s music score.

This is an excellent release well worth a spot in any Who fan’s collection. But it’s not something I’d necessarily recommend for the casual viewer.

Doctor Who: Scream of the Shalka is released on DVD in Australia by Roadshow Entertainment.