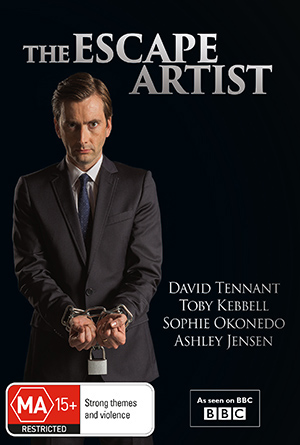 The Escape Artist is a three-part television series from the BBC. Part courtroom drama, part thriller, part perfect-crime setup, it is great television.

The Escape Artist is a gripping, edge-of-your-seat drama. It is tense, intelligent, frightening and emotional. It is unpredictable, heading off in unexpected directions, to a conclusion that is at first a little baffling but ultimately head-noddingly appropriate. But it’s more than that. It’s also a cautionary tale about how the law can be twisted and manipulated to circumvent justice… and that’s what makes it truly frightening.

Sterling performances all round. David Tennant is excellent in the lead role, giving Burton a great deal of sympathy. Sophie Okonedo is a stand-out as the opposing attorney, determined to win at any cost. But it is Toby Kebbell who steals the show as accused murderer Liam Foyle. He is truly creepy!

The DVD comes in a two-disc set with the series on Disc 1 and extras on Disc 2. Unfortunately my review copy was minus the second disc, so I can’t review the additional material. But really, The Escape Artist is so good, it would be worth buying even if there were no extras.

The Escape Artist will be released on 30 April 2014 on DVD in Australia by Entertainment One.

And so it begins… More covers + Supanova