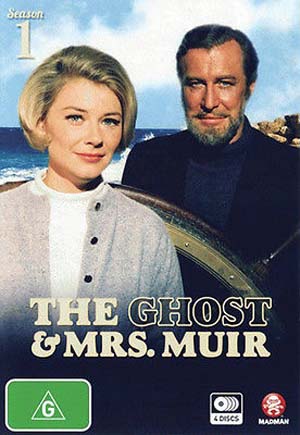 Loosely based on a novel of the same name by RA Dick, The Ghost & Mrs Muir is a 1960s sitcom about a widow and her family, who move into a house that is haunted by the ghost of a sea captain. Although formulaic and sexist, it’s also quaint and rather sweet at times.

The Ghost & Mrs Muir had already been made into a successful film in 1947, when this television updating of the story hit the screens in 1968. The widowed Mrs Muir moves into the secluded Gull Cottage along with her two young children, housekeeper and dog. There she discovers the grumpy ghost of a long-dead sea captain. Captain Gregg is at first unhappy about the interlopers in his house, but soon warms to them. Also added into the mix is the landlord, Claymore Gregg, cowardly descendant of the Captain, who often finds himself at odds with his ancestor.

It is a fairly typical sitcom with problems being resolved by the end of each episode. But there is some nice continuity of character development, with the Captain growing fonder of his new family as the season progresses. It is interesting to note that while the Captain’s irascibility is the cause of many a problem, so too is Mrs Muir’s stubbornness — in fact, on occasion, her actions are much more unreasonable than the Captain’s.

The series is horrendously sexist at times (to be expected from a 1960s sitcom, I suppose), but it is also wonderfully progressive in its portrayal of a strong female lead — a widowed, single mother who supports her family as a writer. The impossible romance between the widow and the ghost is handled with gentleness and a surprising sweetness — never overt and seldom the impulse behind the plots — as is the father/son relationship that develops between the Captain and Mrs Muir’s son.

Hope Lange and Edward Mulhare are excellent in the lead roles, with a chemistry that makes the romance feel genuine. Charles Nelson Reilly is perfect as the bumbling, sneaky and cowardly Claymore. Reta Shaw is suitably deadpan as the housekeeper, while Harlen Carrahar and Kellie Flanagan do well as the cute kids (without being overly cutesy). There’s an interesting array of guest cast across the episodes, including Jonathan Harris (Dr Smith from Lost in Space) as a dentist and future movie star Richard Dreyfuss as a newspaper editor.

The stories vary considerably over the 26 episodes, and while not all of them are great, there are a surprisingly high number of well-written ones. And while clichés abound, there is also a good deal of originally interspersed among them.

The series is well made. Although you can often see the strings during the ghostly effects scenes while watching the DVDs on a large flat-screen television, much of this would not have been visible in the original broadcasts. The soft focus on Mrs Muir is rather overdone in the first episode, but thankfully this is toned down as the series progresses.

I used to watch this series avidly as a kid, and I’m pleased to say that it lives up to my fond memories. Sadly, there are no extras on this DVD release.