DVD Review — Land of the Giants: The Complete First Season 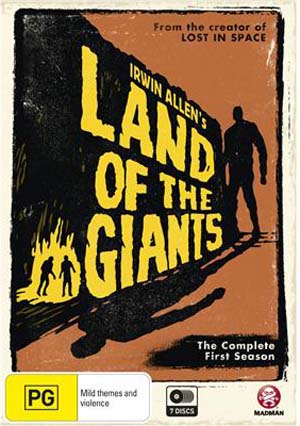 Madman are releasing a string of old Irwin Allen television productions in Australia, and among them is the first season of Land of the Giants. I remember watching this series as a kid, along with Voyage to the Bottom of the Sea, The Time Tunnel and Lost in Space; but I also remember it being my least favourite of the Irwin Allen shows. I’m very pleased to say that, rewatching it now as an adult, I thoroughly enjoyed it.

Land of the Giants was the fourth and final of Allen’s sci-fi TV shows. It ran for two seasons from September 1968 to March 1970.

Set in the then future of 1983, the series follows the adventures of the crew and passengers of The Spindrift, a sub-orbital commercial flight, which passes through some sort of strange warp/space-storm and crash-lands in a land of giants. Over the course of the first season, they attempt to avoid capture as they endeavour to repair their ship.

It’s an interesting concept, and one that is played out quite well. At first the viewer thinks that the ship and it occupants may have been shrunk. It takes a while to discover that this is not Earth. And the society on this world, while very close to Earth is different in its technological development and government structure. The best episodes are those that focus on these differences. The giants are initially depicted as quite slow moving. They also don’t speak much and they have trouble seeing in the dark. But all this is gradually lost as the season progresses.

There are an interesting bunch of characters — Captain, co-pilot and stewardess form the crew; with an engineer, a socialite, an orphan boy and his dog, and a con-man making up the passengers. It’s obvious that the boy/dog/con-man combo was trying to recapture the boy/robot/Dr Smith dynamic of Lost in Space. The actors all do well with their roles, but there really isn’t much here in terms of character development.

There are some interesting guest appearances, including Ron Howard as a boy genius and Michael Ansara in what may very well be the worst performance of his career.

The scripting isn’t great, and never quite lives up to the potential of the concept. The quality of the writing varies, as you would expect over the course of a 26-ep season. You can see the desperation in some episodes to try and find new subject matter and take stories in different directions — so you get our diminutive heroes catching a murderer, creating a hearing aide for a deaf boy and even assisting a stage magician clear his name.

Land of the Giants is a good-looking production and visually holds up rather well. The composite shots are really quite good. The giant sets and props, with the exception of the giant hand that has very limited movement, are excellent. It is the effects work that is the star of this show.

The opening credits are worth a mention. The animated title sequence is very stylish and the theme, composed by future Oscar winner John Williams, is memorable.

The pacing of the series is really interesting. It is quite slow — but not in the way of classic Doctor Who or other British shows of the era. Those shows were slow in terms of taking their time with unravelling the plot, favouring dialogue over action. Land of the Giants favours action over dialogue… but the action is slow. The pacing reduces the excitement and tension of the action. Everything takes a long time to happen, with lingering shots of facial expressions and too much time spent on each special effects shot. It’s as if they’ve decided that since they spent lots of money creating the effects (and at about $250,000 per ep, this was the most expensive show on television at the time), they were going to keep them on screen as long as possible.

There are some good extras on the final disc of this 7-disc set, including the unaired version of the pilot (slower, with a long intro to set up characters prior to the crashlanding), interviews and effects shots. But the highlight is the ‘presentation reel’ used to sell the concept to the network. It’s really interesting to see (and telling of its time) that the most significant character change between the presentation and the final series, was that the female geneticist was replaced with a rich-girl socialite.

All up this is a wonderful release. I very much enjoyed taking a walk down the memory lane of my childhood television viewing.

Land of the Giants: The Complete First Season is released on DVD in Australian by Madman.