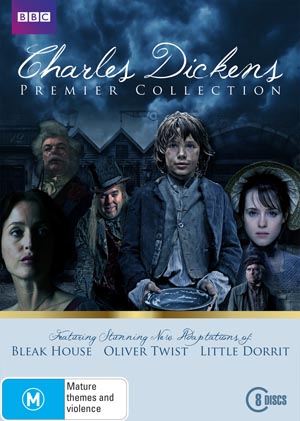 I’m a bit of a BBC costume drama fan. The BBC is just so good at this sort of drama. I watched the Best of Jane Austen box set earlier this year (check out my review on MC Reviews) which was pretty awesome, and then moved on to this one — the Charles Dickens Premier Collection, which includes Bleak House, Oliver Twist and Little Dorrit.

Let me start off by saying that I’m not a huge Dickens fan. I’ve read a few of his books (including Oliver Twist) and found them long-winded and tedious, despite the interesting plots buried within them. Nevertheless, I’ve enjoyed most of the Dickens adaptations I’ve watched over the years, probably because they cut out all the boring bits. So I approached this box set with a degree of eagerness. And I was not disappointed.

First cab off the rank is Bleak House from 2005. Illegitimate offspring and convoluted legal intricacies form the basis of this series, with a little murder/mystery thrown in towards the end. Although primarily a drama with much tragedy, moments of humour emerge through some of the more bizarre characters. It’s a compelling story from beginning to end, that moves along at a good pace.

It’s a moody, atmospheric series, beautifully costumed and effectively shot, with a strong cast. There are no weak performances here, but the standout ones belong to Gillian Anderson (remember her from The X Files?) as Lady Dedlock and Charles Dance as the manipulative and rather heartless lawyer Mr Tulkinghorn. Anderson’s performance is contained and internalised, her character’s pain screaming through her eyes rather than her motions; whereas Dance is pure, controlled evil, without ever going over-the-top.

Bleak House strongly demonstrates Dickens’ dislike for the legal profession and for bureaucracy… something that comes through again in Little Dorrit.

Next in the set is Oliver Twist from 2007. Perhaps one of Dickens’ best-known stories, it tells the tale of an orphan boy who gets mixed up with a bunch of pickpockets after escaping a workhouse and coming to London.

This is a wonderfully contemporary adaptation, full of energy and vitality. One of the first things that struck me while watching it, was the music. Upbeat and often toe-tappingly catchy, it adds a wonderful sense of adventure and fun. But the nastier elements of the story are not shied away from. The anti-Semitism is tackled head-on, as is the squalor of lower-class London life.

The cast is superb. William Miller is an entertainingly gutsy, yet still endearing, Oliver, and you really do believe that Adam Arnold’s Dodger could pick your pockets. Tom Hardy is wonderfully disturbed and dangerous as Bill Sikes and Sophie Okonedo brings a real pathos and understanding to Nancy. But the real star is Timothy Spall as Fagin, with a complex and layered performance, bringing to life a manipulative criminal for whom we manage to feel sympathy.

Finally we have Little Dorrit from 2008, which centres on the character of Amy Dorrit, who lives in a debtors’ prison along with her father. We follow her life as her father is released from prison, an act that leads to much dramatic change. Then there are a host of characters in some way connected to Amy, whose lives we also follow.

This is the weakest of the stories in terms of plot. Long and convoluted, it doesn’t quite gel at the end, with a metaphoric conclusion that just seems a little bit of a let down. But the production is first-rate, with great costumes, terrific direction and a brilliant ensemble cast. It’s still very much worth watching.

Disappointingly, there are only two short behind-the-scenes docos (for Oliver Twist and Little Dorrit) and one picture gallery as extras. I was expecting a lot more than this. The packaging is great — an inner cardboard sleave with plastic ‘pages’ to hold the DVDs, all within an outer slipcase, along with a little booklet of basic info on the shows.

DVD love… but not in a kinky way DVD review – Doctor Who: Series 6 Part 2