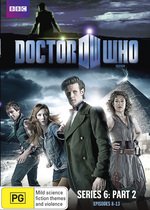 2011 saw a divided season for Doctor Who, with a two-month screening break. And so Series 6 Part 1 came out on DVD in August this year, with Part 2 released earlier this month. Part 1 was pretty good and it showed great promise of even better things to come. (Check out my review at Ticon4) Unfortunately, Part 2 really doesn’t follow through all that well.

Things start off quite poorly with “Let’s Kill Hitler”. This is an episode that should have been awesome — it has Nazis, River Song, a shape changing robot and the Doctor landing his TARDIS in Hitler’s office. The basic premise is really good and it certainly has some memorable moments, but overall it’s rather lacklustre. River Song’s motivations are not convincing, the comedy is overplayed and the whole thing just doesn’t quite gel. A very disappointing start to Part 2, given what a strong episode the Part 1 finale was.

Next up we have “Night Terrors”. Again, a good concept that just doesn’t quite get there. The whole thing is about an 8-year-old boy and the monsters in his room. There’s some good build up, some nice characterisation, but then we get a rather weak ending.

“The Girl Who Waited” is the first promising episode in this collection. Amy is accidentally trapped on the planet Apalapucia, in an accelerated timeline. By the time the Doctor and Rory come to save her, she has aged 36 years. A really interesting story which, despite some problems (like, why is Amy’s hair still the same after all those years?), works rather well. It’s nice to see Amy being allowed to develop a little as a character. It’s the first time I’ve really liked her… although I was hoping they’d keep the older Amy, as she was way more interesting than the young version.

“The God Complex” was, for me, the highlight episode. The Doctor, Rory and Amy, along with a bunch of other people, get trapped in what appears to be an Earth hotel… but, of course, it’s not. It’s a prison, of sorts, and there’s a creature on the loose. But it’s more than just a monster story — the crux of the plot is that this creature is feeding on the faith of others. This allows for some really interesting interaction and some great revelations. And for us old-time Who fans, there is even a Nimon reference. This episode also sees the departure of Rory and Amy. While I had grown quite fond of Rory as a companion, I was very pleased to see the back of Amy Pond, possibly the most annoying companion the Doctor has had in quite a long time.

Unfortunately, the high standard of writing does not continue on to the next episode, “Closing Time”. This episode sees the return of Craig (from the previous season’s “The Lodger”) as well as the Cybermen. Despite some cute moments, mostly dealing with the Doctor’s interaction with Craig’s new baby son, this is a daft episode. The presence of the Cybermen makes little sense and there is heaps of poor, misplaced humour.

And then we finish up with “The Wedding of River Song”. This is a convoluted episode that endeavours to tie up the convoluted season story arc. Although it rolls along at a great pace and has some interesting moments, it is a very unsatisfying finale. Too many things still do not make sense. Too many things are left unresolved. I am desperately hoping that the overly-complex story arc will be cast aside for the next season… it’s really time for Doctor Who to return to some good, old-fashioned story-telling, where motivations make sense and plots have a logical progression.

As with the Part 1 set, this is a vanilla release, the only extras being a couple of Monster Files. While a fine set for the casual viewer, more devoted fans (such as myself) are better off waiting for the complete Series 6 box set, which will be loaded with extra stuff. Despite the fact that Series 6 was not the best of seasons, I’m still looking forward to viewing all the material on the box set release. 🙂

Released on DVD and Blu-ray in Australia by Roadshow Entertainment.