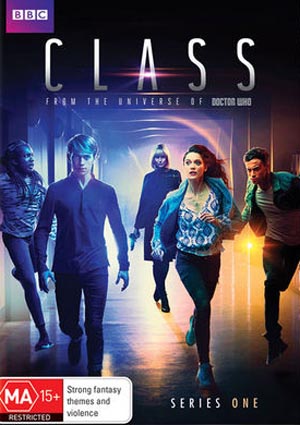 Class. Or… Buffy meets Torchwood via Doctor Who. Or maybe… Buckets of Blood at High School! Snappy dialogue, interesting characters and a nice dose of moral ambiguity combine in this rather stylishly violent teen sci-fi drama, that spins off from Doctor Who.

There have been numerous Doctor Who spin-offs coming to our television screens over the years, beginning with K.9. and Company in 1981. Since the revival of the series in 2005, as a family viewing experience, we’ve had two official BBC spin-offs – Torchwood, aimed at adults; and The Sarah Jane Adventures, aimed at kids. And now, we have one slap-bang in the middle, aimed at young adults – Class.

Class is set at Coalhill Academy, a school that the Doctor and his companions have visited a number of times in the parent series. The Doctor’s granddaughter Susan was a student there in the first episode (back in 1963), the Daleks invaded it during the 1980s (although the story was set in the 60s), and more recently the Doctor’s companion Clara taught there, while the Doctor himself briefly acted as caretaker. So there’s a long history with Doctor Who. But all these timey-wimey visits have resulted in a crack in the fabric of space/time – a crack through which numerous alien baddies might emerge. So a group of students, including an alien prince who is the last of his race, band together (sort of) to defend the school and the Earth. Then there’s a teacher, Ms Quill, who’s also an alien, as well as being the protector/slave of the Prince. And there’s a story arc involving the school’s mysterious Board of Governors. The set-up is a little clunky at times, but once done with, the series quickly finds its feet.

Okay, so the crack through which alien threats emerge isn’t all that original (hello Torchwood). And the set-up of teens as defenders, along with the target audience, is reminiscent of Buffy the Vampire Slayer. And the whole alien prince thing is a bit like The Powers of Matthew Starr (obscure 80s tv crap that I happen to love). And the visuals for the title sequence (which I adore) are kind of a cross between Doctor Who and The Tomorrow People. But overall the series does manage to inject a spark into the whole thing, giving it a vibe all its own – mostly through the characters. They’re an interesting, diverse, believable and complex bunch of people, who don’t always get along, and they draw the viewer through the series.

The cast includes Greg Austin as alien prince-in-hiding, Charlie Smith; Fady Elsayed as tough, soccer-playing Ram Singh; Vivian Oparah as child prodigy Tanya Adeola; Sophie Hopkins as April MacLean, the most ordinary of the group; and Jordan Renzo as Charlie’s love-interest, Matteusz Andrzejewski, who’s kicked out of home by his Polish parents for being gay. They’re all great, but for me the standouts are alien teacher Ms Quill (played with delightful relish by Katherine Kelly) and a relatively minor character, Ram’s dad Varun (played with quiet sincerity by Aaron Neil).

There’s a lot to love about this show… the matter-of-fact portrayal of a gay romance (an important thing for a teen audience); the moral ambiguity of characters, particularly Quill and Charlie; and there are consequences! This is what I love most about the series… actions and events have consequences that ripple through the rest of the series. When one characters’ girlfriend is brutally killed right in front of him (liberally splattering him with blood), he is still suffering the trauma several eps later.

The whole thing comes from the mind of author Patrick Ness, who’s known for his children’s and YA novels. (If you read nothing else this year, make it The Rest of Us Just Live Here… it’s BRILLIANT!) He’s written each of the eight episodes, so there is a consistency of character and quality, as well as a follow-through of themes.

I’ve tried to avoid spoilers thus far, but in order to assess the series in its own right as well as part of the Whoniverse, I’m going to have to discuss the big reveal. Sorry!

Class doesn’t really need its Doctor Who connection. It does very well at establishing its own look, style and identity. It’s almost as if its uniqueness has been bookended with Doctor Who – with the Doctor’s appearance in ep 1 and the reveal at the end of the final ep. And in all honesty, I think the connection with Doctor Who does it more harm than good. It would have been better as its own series. Let me try to explain why.

In the first ep, all is progressing well, until suddenly Quill calls the Doctor for help. And he comes racing in to save the day, taking agency away from the series characters as he solves things for them. But then he says he can’t always be there and that they will have to fend for themselves from now on. I would rather have seen the characters solve the situation themselves.

And then, right at the end of the series, it’s revealed that the Weeping Angels are coming to Earth, the implication being that they would be the main threat for season 2 (if, indeed the series gets a season 2… the jury is still out on that). The problem with this is that the Weeping Angels are a classic example of diminishing returns – brilliant and scary in their first appearance (“Blink”), but slowly watered down and made less scary and less interesting with each subsequent return. Class would be better off with its own alien threat.

The two-disc release is relatively basic, with just one short behind-the-scenes doco. I would have loved some more in-depth stuff. And annoyingly, the cover doesn’t list the eps.

All up, this is a quality series. Although its place in the Whoniverse may be debatable, it is a worthwhile series in its own right. I hope it gets a second season!

Class: Series One is released in Australia on DVD and Blu-ray by Roadshow.