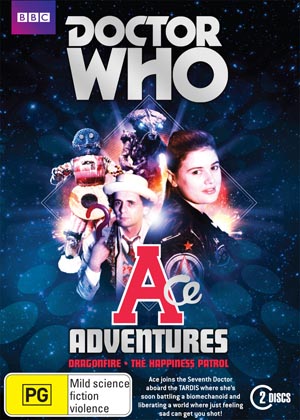 This box set contains two classic Doctor Who stories featuring Sylvester McCoy as the seventh Doctor and Sophie Aldred as his companion Ace — “Dragonfire” from season 24 in 1987 and “The Happiness Patrol” from season 25 in 1988. The two stories are a great example of how both actors progressed in their respective roles in a relatively short period of time.

In “Dragonfire”, the Doctor and Mel arrive on Iceworld, a city made of (surprise, surprise!) ice. There they bump into an old associate, Glitz (who they first met in “Trial of a Time Lord: The Mysterious Planet”), and a mysterious girl named Ace. The four of them go off in search of a dragon’s treasure, while also trying to deal with the machinations of Kane, the literally cold-blooded ruler of Iceworld. This story is noteworthy for the departure of Mel (which is poorly handled) and the arrival of Ace as the new companion (which is well handled). Glitz’s presence doesn’t really sit all that well, and I feel that a new character may have better served the plot.

“Dragonfire” is a problematic and flawed story that still manages to be entertaining. The cliff-hanger to episodes one is daft and the resolution in episode two is even more stupid. The villain’s motives are never quite believable (Why did he wait so long to plan his revenge and why has he been running a shopping mall in the meantime?), and the Doctor’s constant overplayed slipping on the ice is REALLY annoying. Oh yeah, and then there’s that ‘masterpiece’ of an ice sculpture.

On the other hand, there are some great character moments, such as Ace deciding whether or not to take Kane’s offer. And the Doctor’s intellectual discussion with a bored security guard. The model work is quite good and the Raiders of the Lost Ark-inspired melting face scene stands up rather well indeed. The revelation of the dragon’s treasure is great, despite the fact that the dragon itself is rather clumsy. I also really like the unexpected darker elements of the story, such as the melting face and the death of all the innocent shoppers as they try to escape.

“The Happiness Patrol” is a far better story.

The Doctor and Ace arrive on the planet Terra Alpha, where everyone is happy. In fact, the ruler, Helen A., has made it illegal to be anything but happy. The Doctor soon finds himself fighting for the right of people to be melancholy and sad, and yes, even miserable. But first he has to deal with the monstrous Kandyman, a bizarre candy creature with a sweet tooth and a homicidal nature.

This story is many things — political satire (Helen A. bares some resemblance to Thatcher), surreal comedy and sci-fi adventure — and it mixes it all together rather successfully. It also subverts the standard plot of the Doctor arriving on a planet and fixing an unhappy situation, leaving everyone happy at the end. The Kandyman himself is a bizarrely brilliant creation. He’s never fully explained and this actually works very well. The set design is great (particularly the candy kitchen), the music is suitably muzaky and Helen A.’s pet is surprisingly well realised. Yes, there are a few things that don’t quite work (the subterranean Pipe People’s masks, and the far from speedy buggies), but for the most part this is a terrific production.

The guest cast are particularly good. Sheila Hancock’s conviction-filled, self-righteous Helen A. is exceptional. I love the way her only bit of sympathy and emotion is for her pet. And by contrast, Ronald Fraser’s affable and quiet performance as her husband Joseph C, is excellent.

Both stories have only three episodes — an excellent trend of the McCoy era, resulting in pacier plots. Both these stories move along well without any padding.

The most striking thing about the juxtaposition of these two stories is the development of Sylvester McCoy and Sophie Aldred in their respective roles. Aldred’s inexperience is obvious in “Dragonfire”, whereas in “The Happiness Patrol” her performance is more confident and consistent. While McCoy’s performance in “Dragonfire” is good, the character of the Doctor doesn’t seem quite right. By the time we get to “The Happiness Patrol”, he’s settled into the role and is giving us his definitive Doctor. These stories also go to show what an amazing team the seventh Doctor and Ace were. They seemed to fit together so perfectly.

As usual, there are lots of good extra features, including some snappy, fun commentaries. “When Worlds Collide”, a doco on how politics were reflected in Doctor Who, is a real gem. This is a box set well worth getting.

Doctor Who: Ace Adventures is released in Australian on DVD by Roadshow Entertainment.

If you’re a Doctor Who fan, check out the Doctor Who Fan Club of Australia.