DVD review: Doctor Who: Day of the Daleks 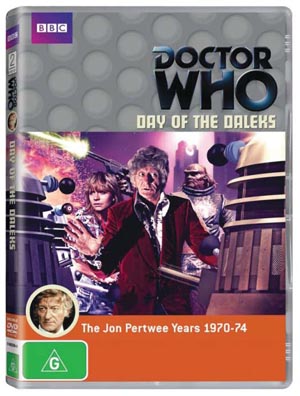 The Daleks have invaded the Earth (Yes… again!), this time in the 22nd Century. Freedom fighters have gotten hold of a Dalek time travel device and are using it to travel back to the 20th Century — to the point in time that is deemed crucial to downfall of the human race. Their intention is to kill a particular politician, Sir Reginald Styles, change history and make sure that the Daleks never invade. But Styles has left and the Doctor and Jo Grant are in his place. And the Daleks, along with their Ogron servants, are on their way.

Sounds exciting, doesn’t it? When it debuted in 1972 as the first story of the ninth season, “Day of the Daleks” was the supposed triumphant return of the Doctor’s greatest enemies, after an absence of five years. Unfortunately, it’s not that great.

It’s a reasonably well-written story, even though the Daleks were actually an after-thought, imposed on writer Louis Marks by the production team. The problem with this four-part story is the production. It is really rather poorly directed. The action sequences are anything but exciting, the dramatic moments overly stagey, and the lack of budget plainly on show. It’s hard to pull off an invasion with only three daleks, but really… did director Paul Bernard have to have expansive wide shots emphasising just what a pathetically unthreatening invasion this was? The Daleks are very unconvincing in this story. Their voices are inconsistent and the props are worn — you can actually see the loose gaffer tape around their bases.

Jon Pertwee is my favourite of the classic series Doctors and he is, as always, a joy to watch. Katy Manning as his assistant Jo Grant is also good. And of course you have Nicholas Courtney in fine form as the Brigadier. The guest cast is variable — ranging from the strong performance of Anna Barry as rebel soldier Anat, through to the over-played stagey acting of Aubrey Woods as the Controller.

This is a two-disc set which includes the original transmitted version of the story, as well as a new special edition. Succumbing to George Lucas Syndrome, the BBC have given us a version with new special effects and some specially shot sequences to beef up the action. I recognise the intent is to make the invasion look a little less pathetic, but the new material just looks out of place. The special edition is interesting to watch as a curiosity… but doesn’t really make it any better.

Lots of great extras, including ‘making-of’ docos on both versions of the story. Doctor Who discs will often contain slightly tangential extras, inspired by something from the story. This time around we’re treated to a great little doco called “The Cheating Memory”. Inspired by the fact that “Day of the Daleks” doesn’t live up to many people’s childhood memories of it, we are given a doco about memory, including an interview with psychologist Dr Sarita Robinson. Interesting stuff!

The commentary on the four episodes has producer Barry Letts, script editor Terrance Dicks, vision mixer Mike Catherwood and guest cast members Anna Barry and Jimmy Winston. They alternate between episodes, which gives them each a turn in the spotlight and keeps things fresh. Not the most engaging of commentaries, but an interesting listen nonetheless.

The two discs come in standard packaging. Now, I should point out that when I say ‘standard packaging’ in reference to Doctor Who DVDs, I’m not being at all derogatory. The ‘standard packaging’ is always good. A slim, two-disc plastic case, with a sleeve that contains heaps of info, including mini-bios on the commentary cast, means we get practical, informative and aesthetically pleasing clothing for these DVDs. If only all TV shows had packaging this good.

My Doctor Who philosophy Out and about