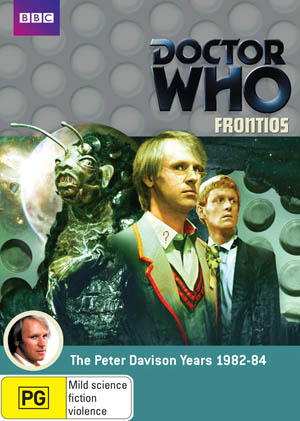 Well, “Frontios” is a bit of a mess, really. There’s not much I can say in its defence. So, at this point, I think it best to refer you to my previous post about my relationship with Doctor Who and how I approach the reviewing of the DVDs (see “My Doctor Who Philosophy”).

“Frontios” is from the 21st season in 1984, sandwiched between a rather good story, “The Awakening” (see my review of “Earth Story” box set), and a rather brilliant story, “Resurrection of the Daleks”. Peter Davison is the fifth Doctor and he is accompanied by Australian airhostess Tegan (Janet Fielding), and alien schoolboy/reformed would-be murderer Turlough (Mark Strickson).

The Doctor & Co. crash-land on the planet Frontios, and the TARDIS is destroyed. Here they meet up with the survivors of an Earth colonisation spaceship that crashed years earlier. The colonists bizarrely think they are under attack from a neighbouring planet because they keep getting bombarded by meteorites. Colonists also keep getting mysteriously sucked down into the Earth, and there appears to be a cover-up about this by the military leaders. Soon they discover that the problems are all caused by giant, intelligent bugs, called Tractators. They live underground in tunnels and can manipulate gravity. Turlough froths at the mouth as race memory of what the Tractators did to his home planet kicks in. The Doc gets friendly with the Tractator leader, the Gravis, and eventually tricks it into putting the TARDIS back together.

Although there is the germ of a good idea in there somewhere, the script contains huge leaps of logic, with character motivations often making little sense. On the plus side, the Doctor is in fine form and there is some amusing dialogue, as when he says of the TARDIS…

“As an invasion weapon, you’d have to agree that it’s about as offensive as a chicken vol-au-vent.”

The script isn’t helped by the fact that it is poorly directed — clunky blocking and lots of wide shots displaying the inadequacies of sets and choreographed action. Even though Doctor Who was always a low-budget show, this story seems ultra cheap… mostly because the Tractators themselves look ridiculous, the costumes having very little movement or expression. The whole thing is rather unconvincing and even slightly embarrassing. The regular cast, particularly Davison, valiantly act their socks off. The guest cast varies from the superb performance of William Lucas as the scientist, Range; to the confused, directionless performance of Peter Gilmore as Brazen. The bit players and extras are particularly woeful.

What about the extra features on the DVD? There’s an interesting making-of doco, during which everybody talks about how bad the Tractators came out and how budget was such a problem with this story. There are also some really interesting deleted scenes. Peter Davison and script editor Eric Saward lead the commentary, with some guest cast and production people making an appearance. Davison is always good value on a commentary, although he seems a little restrained on this one… maybe because of Saward’s presence?

I’m afraid that this DVD is only for the die-hard fans… and the extras do make it worthwhile for us obsessives. But casual viewers are recommended to give it a miss. Don’t say I didn’t warn you. 😉