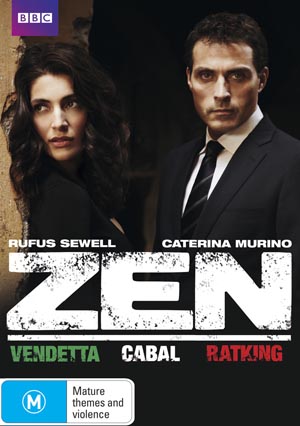 Based on a series of crime novels by Michael Dibdin, Zen is a BBC series of three tele-films about Italian police detective Aurelio Zen. The series is stylish, well-written and shot in Rome — what more could you want?

Aurelio Zen is a mid-level police detective working in Rome. Surrounded by corruption, he ambles along, endeavouring to solve the cases he is assigned while keeping his head above the choppy political waters he finds himself thrown into. Separated from his wife, he lives in an apartment with his widowed mother, and embarks on a relationship with Tania Moretti, a woman in an unhappy marriage who works as a secretary at the police station. Zen has a very straightforward approach to his police work, and despite all that goes on around him, usually manages to land on his feet. Despite his reputation for honesty, he himself is not above a little corruption, albeit at a much lower level than the people attempting to manipulate him.

I’ve never read the books, so I can’t compare — but the series is well written with interesting cases, surprising twists and logical outcomes. But the main strength of the writing is in the characters. There is more to them than just the solving of crimes. All of them, particularly Zen, come across as real people, with personal lives and intrigues and story arcs. You get a sense of their lives before and after what is actually on screen.

The cast are all excellent, particularly Rufus Sewell as Zen. There is a great chemistry between him and Caterina Murino, who plays Tania Moretti. Catherine Spaak is also worth a mention. Playing Zen’s mother, her role is quite small, but she makes the most of it. I would have liked to see more of her.

The series looks superb. The fact that it is actually shot in Rome, completely on location with no studio work, gives it a wonderful look and feel. The scenery is often breathtaking and they also use some really unique locations. The music by Adrian Johnston complements the style extremely well.

Although set and shot in Italy, Zen is a British production. So you have a mostly British cast, speaking with their natural accents. I can accept that. But there are a few cast members with heavy Italian accents, which serve to highlight the non-Italian accents. But I can still accept this as well. What I did find jarring was the fact that background conversations are in Italian. The switch from Italian in the background to English in the foreground was somewhat distracting. But this is a minor quibble for an otherwise excellent production. And, as mentioned in the behind-the-scenes doco, the use of natural accents and background Italian was a conscious decision, made with integrity, by the producers.

Michael Dibdin wrote 11 Aurelio Zen novels. This series adapts only three of them — Vendetta, Cabal and Ratking. I’m very much hoping they do some more, as well as release a soundtrack.

Zen is a two-disc set and contains a rather good behind-the-scenes doco, but nothing more.

Highly recommended for anyone who likes a good quality, stylish crime series with characters that you can care about.

Zen was released on DVD in Australia by Roadshow in February 2012.