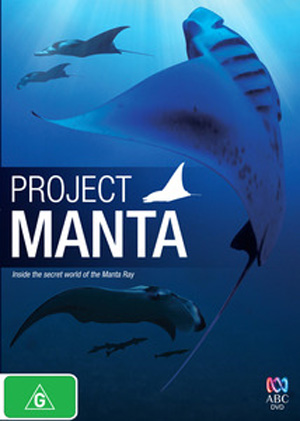 Project Manta chronicles the efforts of a group of marine biologists to track the migration routes of manta rays off the Australian coast. The movement patterns of manta rays are often unpredictable and very individual, making the scientists’ task far from easy. While the efforts of the scientists are interesting enough, it is the manta rays that are the stars of this doco. They are eerily elegant sea creatures — quite beautiful, really — and the footage of them swimming around, looking like prehistoric birds in slow motion flight, makes this documentary very worthwhile.

My eight-year-old daughter, whose current fascination is sea creatures, loved watching this documentary with me. She enjoyed learning about the mantas and what they ate (plankton), and discovering that they are surprisingly intelligent animals. There were, in fact, lots of interesting facts presented here. For instance, did you know that a manta can be identified by its spots? The markings on the white underside of mantas are like human fingerprints — no two are identical.

This documentary also highlights some of the problems that mantas are facing. They often find themselves accidentally caught up in fishing nets. And, most distressingly, they are being hunted for their gills. Apparently there is a high demand for manta gills in the Asian medicine market.

This documentary is not going to be winning any awards for its cinematography. It does not have the epic beauty of a David Attenborough nature extravaganza. But it is nicely put together and contains some lovely footage of the manta rays.

I don’t normally expect much in the way of extra features on a documentary… but this one has a nice little bunch of short extras. There’s “How to become a marine biologist”, “How to dive with Manta Rays”, and a couple of other snippets that look like they had been shot for the documentary, but not used.

If you like a good doco, or if you’re interested in marine life, Project Manta is well worth watching.

Project Manta will be released on DVD in Australia by Roadshow on 5 April 2012.