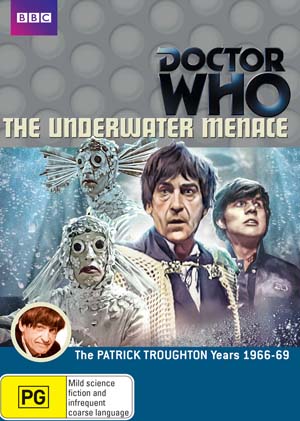 “The Underwater Menace” is a four-part story from the classic series of Doctor Who. First transmitted in 1967 as part of season 4, it is Patrick Troughton’s third story as the Doctor. Three of the four episodes were lost in the BBC’s archival purge, but ep 2 was recovered in 2011. Since then, fans have been waiting for a DVD release. It’s finally here! But was it worth the wait?

The story itself is pretty average. The primitive inhabitants of the submerged city of Atlantis are deceived by a genius scientist named Zaroff, who has promised to raise their city from the water. But Zaroff is not just a genius — he’s also insane and intends to destroy the world (just ‘cause he can) rather than bring Atlantis to the surface. Throw in some captured surface dwellers with an escape plan, some artificially created fish-people on the verge of revolt and, of course, the Doctor and his travelling companions.

It’s all a bit of a dog’s dinner, really. The dialogue isn’t great, the pacing is poor and the staging is clunky. The fish-people scenes are odd! Joseph Furst as Zaroff is way OTT, hamming up the corny mad scientist lines.

“Nothing in ze vorld can stop me now!”

At least the rest of the cast do okay with what they’re given, and Pat Troughton is great as the second Doctor. It’s really interesting to see his take on the Doctor, early in his run. And even though it’s not a great example of Troughton-era Doctor Who, it is kinda fun.

Episodes 1 and 4 are presented as reconstructions. The soundtracks are intact and have been cleaned up but the visuals are just a series of still photos. It’s a rather disappointing reconstruction. There are nowhere near enough photos to make the storyline and actions coherent. It also seems odd that the couple of existing scenes (presented elsewhere on the DVD) were not used in the recon. Even the opening titles are represented by a still image. Past releases of incomplete stories have used animation to present the missing eps — a far more worthwhile exercise.

This one-disc release includes some good extra features. The making-of doco is great, combining cast interviews, a history of the troubled story and some current opinions on its quality. Also included is part 2 of “The Television Centre of the Universe” (part 1 is on “The Visitation”). It’s seems odd to include this doco here, as it is mostly concerned with the Davison era.

The commentaries are a mixed bag. A selection of cast and crew, moderated by Toby Hadoke, chat away about episodes 2 and 3. It’s lively and entertaining. There is an interview with Michael Troughton (Patrick’s son) on Ep 1; and Ep 4 has individual archival interviews with Patrick Troughton, the episode director, producer, and even the original director who turned down the project. They are all really interesting and worthwhile… but are wasted as commentaries. They ARE NOT commentaries and should have been presented separately. I would have liked a proper commentary on the recon eps, perhaps exploring how the reconstructions were put together. Having the interviews here is pointless.

The packaging is also disappointing. In the past, Classic Who releases have included lots of additional info on the inside of the sleeve. Not so this time… it’s blank.

This DVD is for die-hard fans rather than casual viewers. While not a great story or a great reconstruction, it does at least give us the opportunity to see a lost Troughton story. And given how many Troughton eps are still missing, having this DVD available is exciting for fans.

Doctor Who: The Underwater Menace is released in Australia by Roadshow Entertainment.