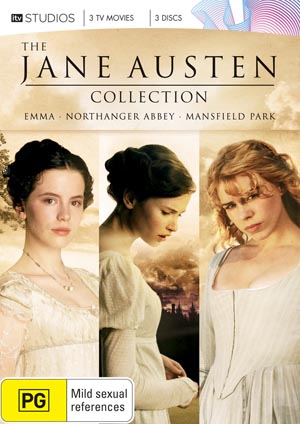 The Jane Austen Collection is a set of three tele-movies from the ITV Studios in the UK — Emma, Northanger Abbey and Mansfield Park. They are three quite varied productions. They are well produced but if, like me, you’re a fan of the BBC productions, you are likely to find these a little disappointing.

First up we have Emma, made back in 1996 shortly after the success of the BBC’s Pride and Prejudice. It tells the story of a young lady obsessed with matchmaking. Despite her interest in the subject, she has no talent for it, and ends up doing more harm than good. And then, of course, there is the matter of her finding her own match. It’s not my favourite of Austen’s stories as I find the character of Emma a tad annoying.

This is quite a good production. It’s well cast and it looks good. Kate Beckinsale makes sure that Emma never becomes too irritating and Mark Strong is excellent as Mr. Knightley. There are some dream sequences that are a little distracting, not quite fitting in with the style of the rest of the production. This is a watchable adaptation, but by no means exceptional.

Next up we have Northanger Abbey from 2006. Catherine is a young woman who likes to read gothic romance novels, which results in a somewhat unrealistic view of life. Romantic entanglements follow.

This is the weakest of the three. The production values are good, but the feeling just isn’t there. It is unsubtle in its script, style and acting. And the excessively used dream sequences and flashbacks are extremely intrusive. Frankly, I wouldn’t bother with this one.

Finally we have Mansfield Park from 2007. As a little girl, Fanny Price is sent by her poor mother to live with wealthy relatives. As she grows into a young lady she falls in love with her cousin Edmund, but he is blind to her true feelings. Much romantic trials and tribulations ensue, until true love finally wins out.

Mansfield Park is probably the best of the three productions. Thankfully there is not a dream sequence in sight. Billie Piper does a good job with Fanny, who could quite easily have been a very bland character as she has none of the spunk and determination Austen usually imbues her leading ladies with. The supporting cast are excellent, with Jemma Redgrave and Douglas Hodge as Sir Thomas and Lady Bertram being particularly good.

The Jane Austen Collection is released in Australia on DVD by Roadshow Entertainment.