My daughters and I are in the Woman’s Day magazine today! We are featured in an article called “Meet the real life House Husbands”. Written in response to the popularity of the House Husbands television series, this article singles out four Aussie dads and their kids. How did we end up in this? 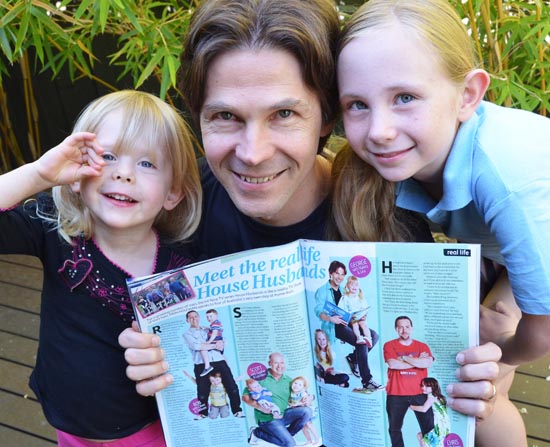 A few weeks ago I came across an ad on a media site. A reporter was looking for men who had chosen to stay at home with the kids while their wives worked. Well, that was me — so I sent off a quick response. A few days later I got an email asking if the girls and I were free for a photo shoot on 5 October… in Sydney!

So, off we went, courtesy of Woman’s Day. It was an 8:30am flight, then straight into a taxi to the photographic studio. Each Dad had photos with his kids, and then the whole lot of us were photographed together… which was quite a task with all those kids! (It’s a shame they didn’t end up using that pic.) Then each of the Dads was interviewed.

The photographer was brilliant with the kids. I’m utterly amazed at how he managed to coax them all into posing, happily. And the reporter was lovely. She let me put a small stack of my books in the photo, and promised to mention the fact that I’m an author in the article — which she did.

I’m hoping this little bit of media attention might rub off on my book sales. 🙂 Although you can’t see my books all that well in the photo, people might Google me after reading the article. I hope!

Anyway, even if no one notices the books or Googles me, the whole things was still lots of fun. The girls had an absolute ball. They loved the plane trip, they thought the photo shoot was fun (especially since they had other kids to play with), and then we had a lovely time doing some sight seeing until our flight home in the evening. 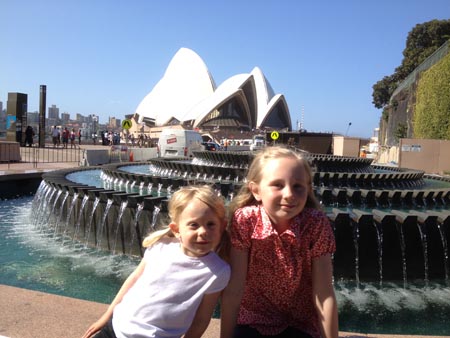 “It’s so nice to see some famous things with my own eyes,” said Nykita, after we had seen the Harbour Bridge and the Opera House.