The massive OTHER WORDS reveal

The time has come to unveil my new OTHER WORLDS book series. This is where I get to tell you a little about it and also show you the first two covers – illustrated by the always awesome James Hart (who also does the covers for my You Choose series) and designed by Tony Palmer.

This is a four-book series aimed at kids aged 8 to 12 (although I’m hoping that like the You Choose series it will have wider appeal). It’s about mysterious keys that open doorways into other worlds. Each book is a stand-alone story with a new set of characters. But, for those who read the entire series, there’s also a thread running through the first three books that gets tied up in Book 4 (which I’m still writing 🙂 ).

Find the Key! Open the Doorway! Enter the Other World!
An exciting new series from the author of You Choose.

Keagan finds a key . . .
It opens a doorway . . .
He steps through . . .
Into a weird world of clones who are obsessed with perfection. But this world isn’t as perfect as it seems. Keagan is determined to return home – all he has to do is find a way out of the city, survive the Dumping Ground and outsmart a bunch of rogue clones!
Will Keagan escape Perfect World?

Originally titled Clone World, it had a name change during the writing of draft 1 to something a little less obvious and hopefully more intriguing. It is without a doubt, the most difficult writing experience I’ve ever had. While I am really happy with the end result, it took about 17 drafts to get there (I usually only do about 9 or 10)!

This book is complete. It will be published on Monday 26 February 2018.

An early review based on an uncorrected proof ARC (advance readers copy) has already appeared in the industry mag Books + Publishing. If you subscribe to it you can check out the full review. If not, here’s a taste…

It’s great to see a sci-fi action-thriller aimed at 8- to 11-year-olds, since it’s an area with many eager readers. George Ivanoff, who penned the excellent ‘You Choose’ series, does a fantastic job of setting up a strange world in the style of The Midwich Cuckoos. This is a racing read that will grip reluctant readers . . . There’s also a strong moral lesson here: be proud of your individuality. 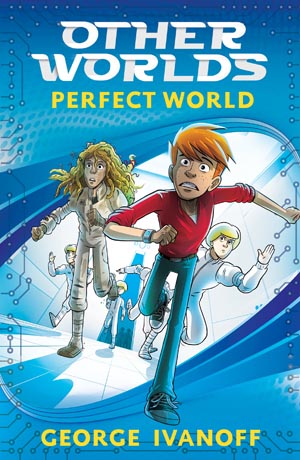 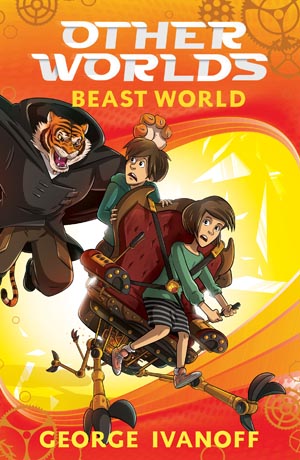 Xandra finds a key . . .
It opens a doorway . . .
She and her brother are sucked through . . .
Into a crazy world that looks like steampunk London. Except in this world there are no humans – only animals. Xandra and Lex encounter rhino police, armadillo housekeeping staff, rodent inventors and even a lion on the throne. Here humans are the endangered species!
Will Xandra and Lex survive Beast World?

Originally titled Animal World, it had a name change early on in the writing process ‘cause really… Animal World is a pretty uninspiring title. 🙂

This book is almost complete. It’s currently being proofed. It will be published on Monday 26 February 2018.

No blurb yet. This one is set in a futuristic cyberpunk world where humans and robots are battling it out in a virtual arena with games. Except, of course, that not all is as it seems. It’s managed to retain its title all the way through the process.

A draft is complete and with my editor getting its first structural edit. It will be published some time 2018.

This one is just an outline with a few rough chapters at this stage, so I’m not telling you anything about it yet. It will be published some time 2018.

So there you have it. I am so incredibly EXCITED about this series! I cannot wait to actually hold copies of the book in my hands! I cannot wait until they are set free into the world!