OTHER WORLDS in Book Week 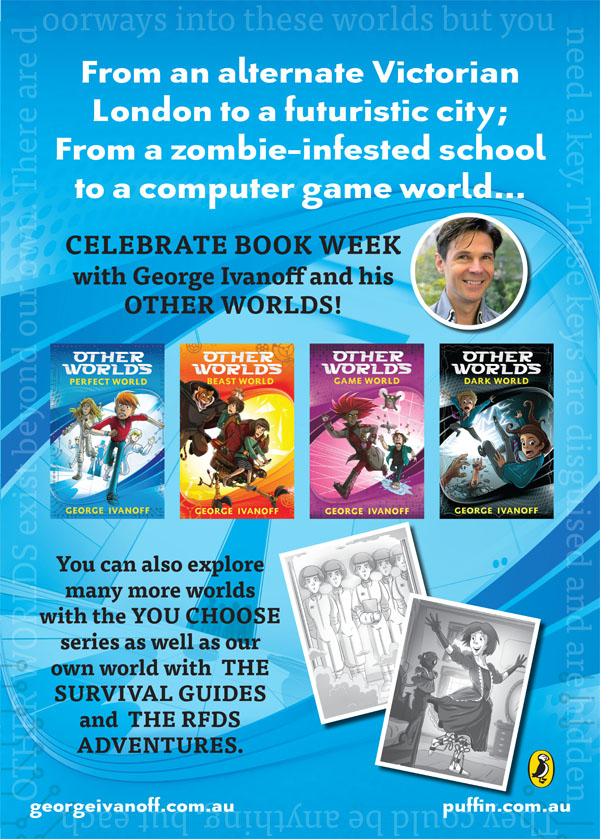 The following article was recently published in the CBCA Vic Branch Newsletter.

OTHER WORLDS in the classroom

Each year the Book Week theme opens the doors of possibility, giving teachers and librarians an opportunity to get children engaged with reading. But more than that, these themes can lead to classroom discussions on a wide variety of topics, expanding young minds. As an author who does a lot of school speaking around Book Week, I always look for creative ways in which I can incorporate the theme into my presentations, relating it to my own writing. So it was with utter delight that I greeted the announcement of this year’s theme — Old Worlds, New Worlds, Other Worlds — which fits so perfectly with my four-book series OTHER WORLDS.

The OTHER WORLDS series was published by Penguin Random House in 2018 and aimed at mid to upper primary readers. I have since written other books, and it is these newer books that tend to take top spot in presentations. But I have a huge soft spot for the OTHER WORLDS books and am relishing the idea of talking about them once again, and giving them pride of place in Book Week presentations.

My main aim in writing any story is to entertain my readers. But my interests, my opinions and my worldview will play a part. The OTHER WORLDS books, more than anything else I have written, reflect the way in which I, as a human being, engage with the world. So, while these books reflect my interest in science fiction, fantasy, computer games and history, they also display my views on gender parity and stereotyping, diversity, ethics, and the importance of being true to oneself.

The books are about kids who find mysterious disguised keys that open doorways into other worlds. Each book is about a different kid and a different world, so they can be read as individual stand-alone stories, or together as a series. And the four worlds manage to correspond to the Book Week theme rather nicely.

This aspect of the theme conjures up images of the past, of history, of bygone days. In Beast World a wheelchair bound girl named Xandra is pulled through a doorway into a city full of well-spoken, well-dressed anthropomorphised animals. That city, Londinium, is an alternative version of Victorian London. The Victorian period is my favourite little pocket of history, and I spent far too much time researching it during the writing process. My city has the same layout as London, with buildings such as the Victoria and Albert Museum and the Crystal Palace featuring heavily in the story. And a few of the animal characters are fictitious versions of prominent historical figures, including Nikola Tesla and Queen Victoria herself. Classroom discussions and exercises could easily be centred around which elements of the story are inspired by history and which are pure imagination, and indeed, how the two are interwoven.

There is also the opportunity to talk about disability, how disabled people are portrayed in fiction and how they are treated in our own society. In the book, Xandra has muscular dystrophy and is in a wheelchair. But this is not presented as a weakness, as Xandra is a strong and capable human being. In the strange world of talking animals that she visits, she meets a lion Queen who is struggling with her own disability; and Xandra must convince her that disability is not a weakness and does not define a person.

New Worlds makes me think of the future, of technology and what new things might develop. In Perfect World a boy named Keagan visits a futuristic city with extraordinary technology, peopled by identical, supposedly perfect clones. In this society, there is no diversity and no tolerance of anyone who is different. In order to avoid disaster, Keegan needs to teach them about diversity and difference, and how they are actually strengths rather than weaknesses. The world is new and futuristic to Keagan, but the problems are relatable and human. Classroom discussions could revolve around diversity and acceptance, with students comparing the issues of the world Keagan has entered and the world we live in. 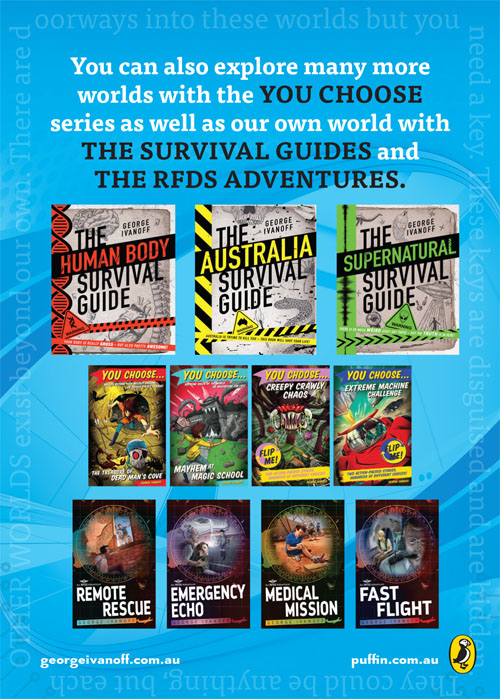 Worlds that are unfamiliar and strange, is what Other Worlds brings to mind for me. In Game World, a video game obsessed boy named Hall is thrown into a world of computer simulations and games within games. He and his game-playing opponent must face various dangerous scenarios, which chip away at the facade they both present to the world, eventually showing them that in order to win, they need to be themselves and cooperate rather than fight. Classroom discussion could stem from the comparison of game avatars to people hiding their true selves. There is also the opportunity to discuss diversity, through the ethnic background of some characters — Nguyen Thi Bian, Hall’s opponent, is Vietnamese and Field Marshal Maheera, although an inhabitant of a virtual world, has an implied Indian background.

Although not explicitly part of the theme, the idea of familiar worlds follows on from Old Worlds, New Worlds and Other Worlds. In Dark World, two school rivals, Newt and Rowan, enter a world very much like their own – identical in fact, except that it has been destroyed, with some of the inhabitants turned into zombies. This familiar yet different world is peopled with counterparts from their own world, with one in particular, Dr Bloom, becoming a very different person because of the choices she made earlier in life. This could lead to a discussion on choice, and how every decision in life has consequences. There is also the opportunity to discuss ethics, as Dr Bloom is a scientist who believes that the end justifies the means.

As you can probably tell by this point, I am rather enthusiastic about the themes and issues that I have woven through these stories. They are things that are important to me as a human being and a member of society, and they are things that I believe should be represented in the stories we write, inspiring young readers to broaden their perspectives. And for me, that’s what Book Week allows for — an engagement, not only with the pure joy of reading (although that in itself is both wondrous and wonderful), but a chance to connect with themes and issues on a deeper level.

Teacher Notes for the OTHER WORLDS series are available from the Penguin Random House website. While I am already fully booked for school visits during Book Week this year, I am available at other times and would be happy to talk to students on the Book Week theme at any time of the year.

If any teachers want digital digital posters like the one at the top of this post, email me and I can forward a hi-res file. Theoretically, there will be printed posters and cards available eventually… but the recent Sydney lockdown is interfering with the printing of these.

To get a small taste of the OTHER WORLDS books, here are a few reading videos and book trailers…