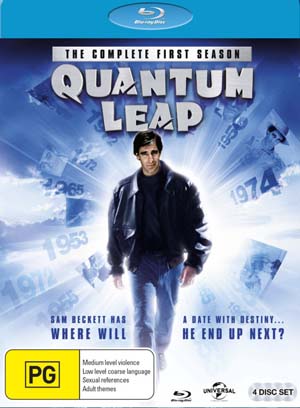 Running for five seasons from 1989 to 1993, Quantum Leap is a science fiction, time-travel TV series with bucket-loads of heart. The whole series has been available on DVD for a number of years, but the first season has now been released on Blu-ray… a perfect time to revisit it.

The premise is simple. In the 1990s, physicist Sam Beckett is working on a time travel experiment. When funding is threatened, Sam steps into the quantum accelerator to prove his theory that it is possible to time travel within the span of your own lifetime. And off he goes. Problem is, he can’t get back.

Each time he arrives in another time/location, he takes the place of someone there. To everyone else he looks like whoever he has replaced. To the viewer, he looks like Sam. His brain is scrambled a bit by the leap through time, and he conveniently can’t remember everything he needs. Communications with his own time are maintained via a holographic link with his colleague Al Calavicci. They soon figure out that in order leap out of a particular time and place, Sam needs to fix something – correct history where it has inadvertently gone wrong. And so ensues a series of adventures — some funny, some dramatic — where Sam leaps from life to life, time-period to time-period, putting things right.

I had not seen this programme since it originally aired. I loved it back then, but was worried about how it might have dated (as so many shows from this era have). I am pleased to say that it has aged very well indeed. It is so well-written, well-acted and well-produced. Thoughtful, topical and full of heart, it is just as engaging and entertaining now, as it was when it first aired.

This first season is only eight episodes long… but every single one of them is a little gem. There are no weak links here. The pilot is perhaps a little slow in places, but it is so good in every other respect, that you forgive it. In fact, that first ep is particularly good in its portrayal of the lives of the wives of military test-pilots. But every episode really immerses you in not just the historical period, but also in the lives of the people living there.

The highlight for me was “The Colour of Truth”, where Sam leaps into the life of the black servant of an elderly southern woman in 1955. This episode tackles racism head-on, but also gives us a set of believable character to care about.

There are only two regular cast members — Scott Backula as Sam and Dean Stockwell as Al. And they are perfect! Backula gives Sam just the right balance of naivety and determination; of wide-eyed enthusiasm for each new situation, coupled with a desire to get home – making him amiable and engaging. Stockwell, despite playing a heavy-drinking, cigar-smoking, womanising lech, imbues Al with such a likeable charm. You can’t help but care about these two.

The recreation of time-periods is well handled — sets and costumes are great. There’s not much in the way of special effects — they have been kept simple, so tend not to date. The signature effect is Sam looking into a mirror each episode, to see the reflection of the person he has replaced. Although occasionally the movements don’t quite match, the effect is really very effective (excuse the pun).

All up this is an excellent series. Well worth revisiting, if you’ve seen it before, or discovering it for the first time.

Extras include intros to each episode by Scott Bakula and a message from Bakula and Dean Stockwell to fans. But the highlight is “A Kiss With History: Remembering Quantum Leap”, a great little retrospective doco about the series. The 2-disc set has standard Blu-ray packaging, but disappointingly doesn’t include a list of eps. This is such a basic omission and it really bugs me that so many Blu-rays and DVDs don’t give you a list of eps on the packaging.

This is the first time Quantum Leap has been released on Blu-ray. Nice as that is, I’m not sure there’s any real benefit to it apart from having the eps on a smaller number of discs. The extras are the same as on the DVD, and there doesn’t seem to be any discernable leap in quality (there I go, punning again). So if you already own the DVD, I wouldn’t bother upgrading. But if you don’t already own the series (and it is well worth owning), you might as well get the Blu-ray. I’m certainly hoping the remaining seasons get a Blu-ray release.

Quantum Leap: The Complete First Season is released on Blu-ray in Australia by Viavision Entertainment.