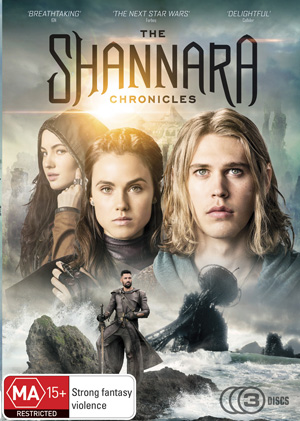 Based on the best-selling books by Terry Brooks, The Shannara Chronicles is a lavish 10-part fantasy series. A mix of fantasy clichés and intriguing ideas, it’s good-looking and a lot of fun.

Set hundreds of years after an apocalypse that has wiped out human civilisation, the Four Lands are now ruled by elves, with other races running about, including trolls and gnomes. And there are still humans in the mix as well. In the past, these races have battled against demons and managed to defeat them, their imprisonment accomplished via a mystical tree called the Ellcrys. But the Ellcys is not well. It’s dying and dropping its leaves. Each time it drops a leaf, a demon is released. It’s only a matter of time before the last leaf falls and the demon army is complete, ready to devastate the Four Lands. Elven princess Amberle Elessedil is chosen by the Ellcrys to go on a quest (surprise, surprise) that will save the Four Lands. She teams up with a human rover named Eretria and a half-elven wanna-be healer, Wil Ohmsford. A bit of a romantic triangle thing ensues. Wil also happens to be descended from the Shannara kings of old. Oh yeah, and he has latent magic powers. And then there’s the Druid advisor to the elves and his evil counterpoint, the Dagda Mor. So… elves, magic, druids, demons and a desperate quest — everything you need for an epic fantasy tale.

The stylish opening credits lead in to a series that blends the fantasy clichés with an interesting post-apocalyptic world. Episode 1 suffers a little from set-up syndrome, but the series settles into a good pace thereafter. It’s entertaining, exciting and not too brain-straining, with a simple but effective plot. Things are resolved by the final ep, although also opened up for a second season.

Where The Shannara Chronicles stumbles, is in the details. Inconsistency of distance; silly little things like captors getting our heroes to change out of their disguises and back into their original clothes before facing the consequences; little details that distract and annoy. Oh… and then there’s elven security. Seriously, these guys have the WORST EVER guards. Seems like anyone can break into their palace without much difficulty.

It’s fairly obvious that much of the cast has been chosen for their looks rather than their acting abilities. Having said that, none of them are terrible. Still, John Rhys-Davies (as the elven king) manages to act the crap out of the younger cast.

Although a US series, it’s shot in New Zealand. The scenery is breathtaking. The effects and makeup are very good. The costuming is adequate. Visually, the series is pretty good.

The three-disc release (in standard plastic case) is disappointing in terms of extras. There’s a Behind the Scenes doco… but it’s less than four minutes. And that’s it.

The Shannara Chronicles is certainly no Game of Thrones, but it is engaging and entertaining. In fact, with its more restrained approach to sex and violence, this series is ideal for teen audiences wanting a fantasy fix. If they make a second season, I’ll be watching.

The Shannara Chronicles is released in Australia by Roadshow Entertainment.