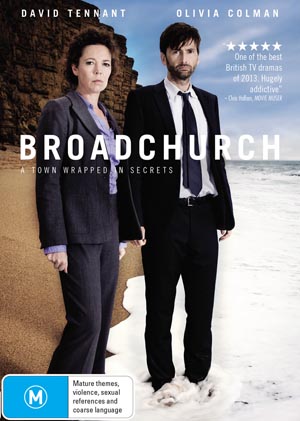 Broachurch is a convoluted and intriguing murder mystery series set in a small English town. It’s well written and beautifully produced, and had me on the edge of my seat from beginning to end. In fact, I watched all eight episodes in just two nights.

The lives of people in the town of Braodchurch are sent into emotional turmoil when the body of a local 11-year-old boy is found dead on the beach under suspicious circumstances. The newly arrived Detective Inspector Alec Hardy and the local Detective Sergeant Ellie Miller, team up to investigate, uncovering secrets and hidden histories along the way. It seems that no one is quite what they appear to be. Of course, it’s not long before things turn nasty, with accusations and judgments flying fast.

In a lot of ways, Broadchurch reminds me of Twin Peaks, beginning with the fact that both shows are named after the towns in which they are set. In both there is a murder investigation that winds its way through a character study of the inhabitants of a small town. And in both cases the revelation is unexpected. Granted, Broadchurch doesn’t have the surreal fantasy elements of Twin Peaks, and the characters are not quite so bizarre — but Broadchurch does have a minor supernatural thread and some of its characters are a bit quirky. And there is the hauntingly pervading sense of melancholy.

The backbone of this series is the relationship of the two police detectives investigating the murder. David Tennant and Olivia Coleman are both excellent in their respective roles. Their initial antagonism eventually develops into a working relationship with a grudging respect and even some empathy. The relationship is developed with subtlety and is never clichéd (which it could easily have been).

The supporting cast are also excellent —Pauline Quirke as the reclusive Susan Wright and David Bradley as the newsagency owner with a misinterpreted past are particularly good.

Broahchurch is brilliant television… and I’m very pleased that a second series has been commissioned.

The DVD release is a little thin on extras. No commentaries. Some photos and filmographies. And a good 25min making-of doco.

Broadchurch is released of DVD in Australia by Roadshow Entertainment.