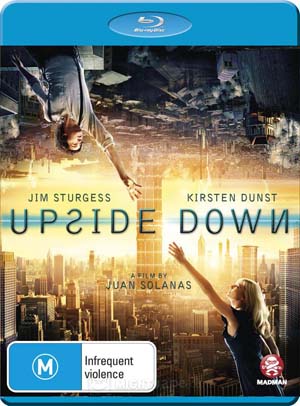 Upside Down is a visually stunning, romantic fantasy film from Canada. Despite some problems, it is a captivating watch.

Upside Down is a classic romantic story — boy meets girl; boy loses girl; boy gets girl back. But it’s set within a wonderfully original fantasy world (or worlds to be more accurate). There are two planets existing side by side, almost touching, each with its own gravity. The worlds are separate and there is limited opportunity for interaction, as anyone from one planet visiting the other is drawn back to his/her own world by gravitational pull. As you’ve probably guessed by now, the central characters are from different planets and their love is very much against the odds. Human law, as well as the law of gravity, is against them.

The film has a wonderfully lyrical quality. It often feels like you are watching poetry rather than a story. And it is visually breathtaking. The cast is great — Kirsten Dunst and Jim Sturgess have a believable onscreen chemistry; and Timothy Spall is rather brilliant in the smaller role of Bob Boruchowitz.

Where the film stumbles is in the details. There are some world building inconsistencies and a lack of coherent explanations at the conclusion — things are glossed over and they don’t hold up to scrutiny. I also felt that the beginning monologue, which tries to place the events into a very science fictional context (two planets with opposing gravities), was a mistake. The film’s set-up works better as pure fantasy.

The film is stunning in hi-def Blu-ray. There are not a lot of extras on the disc, but the Behind-the-scenes featurette is rather good.

All up this is a really interesting and beautiful film — well worth watching despite some problems.

Upside Down is released in Australia on DVD and Blu-ray by Madman.

DVD Review — Broadchurch A thank you to my teachers