DVD Review — Doctor Who: The Krotons 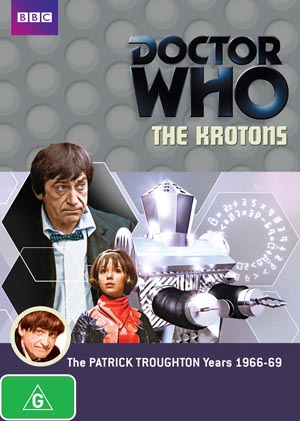 Despite some rather clunky aliens and poor effects, “The Krotons” is surprisingly entertaining classic-series Doctor Who. A four-part story originally transmitted in 1968/9 as part of the 6th season, it stars Patrick Troughton as the second Doctor, accompanied by future-girl Zoe (Wendy Padbury) and Jamie the highlander (Frazer Hines).

“The Krotons” sees the Doctor and co. arriving on an unnamed planet where the local inhabitants, the Gonds, are subjugated by the mysterious Krotons. The Gonds have served the Krotons for over a thousand years, but have never seen them. The Krotons are a crystalline race who crashed onto the planet in their spaceship, the Dynatrope. They have been in suspended animation ever since, their machines teaching the Gonds and taking the most intelligent of them into the Dynatrope. These Gonds have their mental energy drained by the machines in an attempt to revive the Krotons and repair the damaged Dynatrope. The Doctor, of course, discovers the truth of the situation, but inadvertently revives the Krotons, who realise that he and Zoe have enough mental energy to repair the Dynatrope.

This story is often put down by fans. Yes, the Krotons are clunky and at times ridiculously laughable in appearance. Yes, Robert Holmes would go on to write more highly regarded stories for Doctor Who (this was his first). But “The Krotons” is a good story that transcends its budgetary limitations. The pacing is excellent and the action sequences (particularly Jamie’s fight scene) are well handled, there are lots of interesting concepts and the whole thing is rather enjoyable. I particularly love the concept of education being used to control and subjugate a race —the Krotons only teach the Gonds what they need them to know, and outlaw the learning of what they consider potentially dangerous subjects.

The dialogue is witty and insightful, as you would expect from Holmes.

“Zoe is something of a genius… It can be rather irritating at times.”

‘It is not patriotism to lead people into a war they cannot win.’

It’s interesting to note the absence of any incidental music. It actually works rather well, with sound effects coming to the fore. It also serves to demonstrate, by comparison, how over-scored the current series is.

The regular cast are in top form. They each get some good individual moments and their interaction is superb. I particularly love the scenes with Zoe and the Doctor at the learning machines and inside the Dynatrope — they both play the humour extremely well. The guest cast are also excellent.

As usual, there are lots of interesting extra features, including a commentary with numerous cast and production people. “Second Time Around”, a doco looking at the Patrick Troughton era of Doctor Who is a definite highlight.

All up, this is a great release. Perhaps not the best Troughton story, “The Krotons” is nevertheless an interesting and enjoyable piece of vintage Doctor Who.

Doctor Who: The Krotons is released on DVD in Australia by Roadshow Entertainment.

Launch Videos Outside In