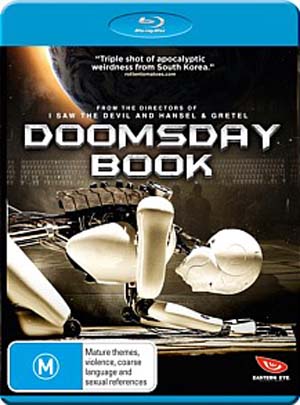 The quote on the front cover of this Blu-ray says: “Triple shot of apocalyptic weirdness from South Korea”. And it’s not wrong! Doomsday Book is an anthology film, comprising three end-of-the-world scenarios.

The first story, a biological apocalypse, is the most uncomplicated; with the following two providing increasing increments of bafflement. A geeky young man and a rotten apple set off a chain of events leading to a rapidly spreading zombie infection. It’s effective, humorous and odd; and reasonably straightforward in its story telling.

The second story is about a philosophical apocalypse… with robots. And it’s my favourite of the three. Beliefs are called into question as the monks of a Buddhist monastery claim their robot has achieved enlightenment and become the reincarnation of Buddha. The story contrasts sharply with its predecessor — it’s wordy, moves as a sedate pace, but is quite stylish. Upon finishing it, my initial reaction was a resounding “huh?”. But with a little thought and discussion, the penny dropped and it all suddenly made sense.

No such luck with the third story — an utterly baffling tale in which the end of the world is caused by a billiard ball that has fallen through a black hole, only to return to Earth in gigantic form after a young girl orders it over the Internet. Confused?!!? Perhaps this story loses something in the translation — but I just didn’t get it.

The film is in Korean with English subtitles.

Doomsday Book is an interesting and unusual film. If you want some odd, challenging sci-fi, look no further.

Doomsday Book is released on Blu-ray in Australia by Madman.