Doctor Who: The Doctors Revisited is a series of discs released for the 50th Anniversary of Doctor Who, looking back at each of the Doctors, up to Matt Smith’s #11 (or #12 or #13 depending on how you now count them after the revelations of “The Day of the Doctor” and “Time of the Doctor”). Favourite stories for each Doctor are combined with new docos, resulting in a great introductory set for newbie Doctor Who fans.

There is one DVD for each Doctor, and these are divided up into three sets: 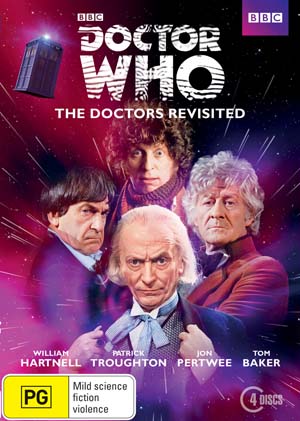 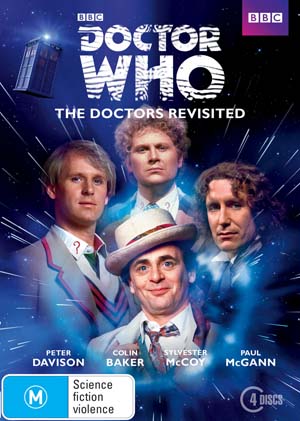 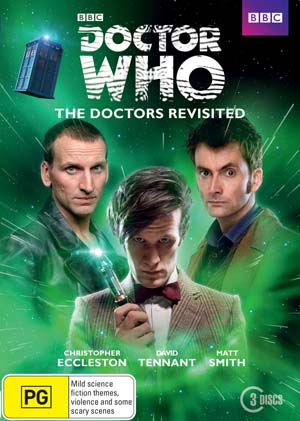 Each disc contains a half-hour documentary about a specific Doctor, coupled with one story that supposedly represents that Doctor and his era. The stories are presented in two formats — the original episodic format with correct aspect ratio and an edited together ‘feature’ format forced into widescreen. The feature versions all begin with a short intro from current showrunner Steven Moffat.

The docos are great! They provide an excellent overview of each era — a perfect catch-up for new fans who have not seen the classic series, and a good overview for those of us who have.

The intros from Moffat are very short but also interesting … A good insight into what he likes about the series. And it’s great to see his obvious fan-boy affection for the series.

The feature presentations are an abomination to be avoided at all costs. I can live with the episodes being edited into one long presentation, but why force then into widescreen? It serves no purpose other than to distort the vision of the original creators. Watch the Moffat intros, by all means, then skip to the proper versions.

As for the stories — they are interesting choices. Most of them are, in fact, great choices… but there are a couple that are (in my humble opinion) questionable. So let’s look at them one by one…

William Hartnell – “The Aztecs”
It’s great to see a purely historical adventure chosen to represent this era (as they were phased out after Hartnell). This is a particularly good one as it focuses on the inability to change aspects of history.

Patrick Troughton –  “Tomb of the Cybermen”
One of the best Cybermen stories of all time, with that iconic moment of them breaking out of their tombs, and a great example of the Troughton era.

Jon Pertwee – “Spearhead from Space”
My personal favourite story of this era. Pertwee’s introduction (he takes the part and runs with it from word go), the establishing of the Eathbound U.N.I.T. format, and an all round cracking good story, featuring one of the show’s most iconic moments (shop dummies breaking through windows and attacking passers-by). Perfect!

Tom Baker – “Pyramids of Mars”
Baker at his best, teamed with the wonderful Sarah Jane Smith in a story mixing sci-fi with Egyptian mythology. And those mummy robots are terrifying. Classic stuff!

Peter Davison – “Earthshock”
This story featured the surprise return of the Cybermen and the tragic death of a companion. Very memorable! Excellent choice!

Colin Baker – “Vengeance on Varos”
As well as being regarded at one of Baker’s best stories, it also contains a critique of television violence while encapsulating the much-criticised violence of this era. Another excellent choice!

Sylvester McCoy – “Remembrance of the Daleks”
One of McCoy’s best, as well as being a brilliant Dalek story and an excellent story for Ace. It captures the feel of the McCoy era with the Doctor as arch-manipulator. Yet another excellent choice.

Christopher Eccleston – “Bad Wolf/The Parting of the Ways “
The Series 1 finale is perhaps not the best of Eccleston’s stories, but it does provide a feel for the era. And hey… it’s got Daleks, the first nuWho regeneration and the wrap-up of the Bad Wolf storyline.

David Tennant – “The Stolen Earth/Journey’s End”
Okay… now this one’s not a great choice. It is, in my opinion, one of the weakest season finales of the Tennant era. But, I can see why they included it — Daleks, the return of Davros and all of Tennant’s companions coming together to save the universe.

Matt Smith – “The Impossible Astronaut/Day of the Moon”
Again… I don’t like this choice. It’s the beginning of a convoluted arc that formed much of the Smith era, so I can see why it was included. But there were so many better stories to choose from.

All up, these are great sets for new fans, or people who just want a few of the better Doctor Who stories on hand rather than owning them all.

Doctor Who: The Doctors Revisited is released on DVD in Australia by Roadshow Entertainment.

Blu-ray Review — Doomsday Book DVD Review — Doctor Who: The Best of the Doctor 2005-2011, The Documentaries