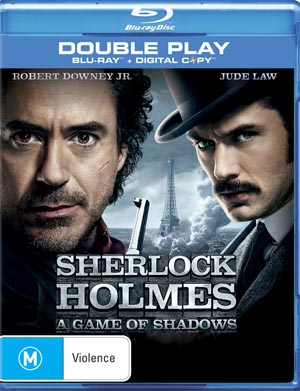 This is the second film in director Guy Richie’s blockbuster series based on Sir Arthur Conan Doyle’s Sherlock Holmes stories. And like its predecessor, it’s actually more of an action/adventure flick than a Sherlock Holmes film. It is, however, highly entertaining.

This time around Holmes and Watson come face to face with Professor Moriarty, a criminal mastermind with plans of world domination. Irene Adler, who featured heavily in the first film, only has a brief appearance at the start of this one, and is quickly replaced with a new character — a gypsy woman named Madam Simza Heron. There is much running about, lots of fight sequences, some spectacular action and some great locations as our heroes make their way across Europe, finally ending up at Reichenbach Falls in Switzerland.

The film is well-paced and exciting and rather spectacular at times. Certainly a notch above the last one. But there is a sense that the filmmakers have concentrated a little too much on the effects and grandeur, rather than the deduction and the mystery. Even Holmes’s deductive process seems to have its emphasis on spectacle rather than intellect.

Although Holmes is clever, he is very much portrayed as an action hero, and there is the tendency to over do the humour at times. Robert Downey Jr. puts in a convincing performance, but his interpretation of Holmes really doesn’t fit my view of the character. Jude Law is great as Dr Watson. It’s good to see an intelligent Watson who is just as necessary to the plot as Holmes. (Watson is sometimes dumbed-down in adaptations, such as in Sherlock Holmes in New York.) Law and Downey have a believable onscreen chemistry, working off each other with seamless ease, and it is this that makes the film particularly watchable. Stephen Fry is amusing as Mycroft Holmes and Swedish actress Noomi Rapace is more than just an action heroine as Madam Simza Heron. It is, however, Jared Harris who steals the show as Moriarty. In this somewhat over-the-top film, he provides grounding and true, calculating menace with his measured and restrained performance.

Overall I was left with the impression that this film, like its predecessor, wasn’t really a Sherlock Holmes film. It was an OTT action flick squeezed into a vaguely Holmesian shape. Undoubtedly entertaining. But not really Sherlock Holmes.

The Blu-ray release is wonderful. The action sequences and spectacular effects are brilliant in high-def. There are some good behind-the-scenes extras on the disc. Unfortunately, much of the behind-the-scene stuff is presented in an extremely annoying way — Maximum Movie Mode. As you watch the film in this mode, Downey pops up every now and then to give you some added info and show you how certain things were done. It’s gimmicky and jumpy, and Downey comes across as rather smarmy and annoying in his hosting role. I quickly gave up on watching it. I would have much preferred a detailed ‘making of’ documentary.

If you liked the first film, you’ll love this one.

Sherlock Holmes: A Game of Shadows is released on Blu-ray and DVD in Australia by Roadshow Entertainment.