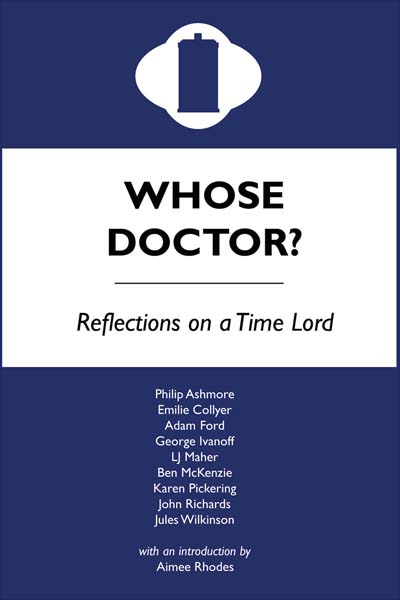 Okay… if you’re a regular visitor to my little corner of Cyberspace, you undoubtedly know about my little Doctor Who obsession. I watch it often. I buy all the DVDs. I collect the sonic screwdriver toys. I put Doctor Who references into my books. And, whenever given the opportunity, I write about the show.

Last year, I had an essay included in the academic anthology Doctor Who & Race. It got shortlisted for the William Atheling Jr Award for Criticism or Review. 🙂

This year, I have a piece of writing in a new eBook about Doctor Who — Whose Doctor? Reflections on a Time Lord. Edited by Adam Ford, this Aussie essay collection includes contributions from:

Each piece is based on work performed live at “Not Quite the Big Finish: An Evening of Doctor Who Spoken Word”, an event organised by Melbourne Library Services last year. Mine is a letter — a letter to Steven Moffat, to be precise.

Whose Doctor? Reflections on a Time Lord is a bargain at just US$5 and is available in multiple formats from Tomely and Smashwords. It even has its own Twitter hashtag — #WhoseDoctor

You can also check out my original performance. It’s not a fabulous quality vid, but it is watchable…

While we’re on the subject of Doctor Who (and when aren’t we?), I’ve gotta tell you about something really cool that happened during a recent school visit. I presented three sessions at the Dromana Secondary College Readers and Writers Festival. A group of Doctor Who fans stuck around for a chat after the final session. One of them happened to be a music student. And there just happened to be a piano in the vicinity. Suddenly, he was playing the 11th Doctor’s theme… the music echoing around the auditorium foyer, like a time traveller bouncing around the space/time continuum. Sadly the TARDIS did not materialise as I was hoping it might. But it was still a REALLY COOL moment!