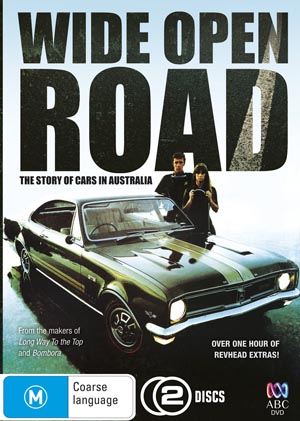 I’m not, by any stretch of the imagination, a rev-head. In fact, I find the whole rev-head mentality rather difficult to understand. And yet, here I am, about to launch into a review of a great three-part documentary series, Wide Open Road: The Story of Cars in Australia.

For me, cars have always been about practicality — the need to get from point A to point B; the need to have an affordable and reliable car that is easy to drive. It’s never been about status or sexiness or speed. So, in all honesty, Wide Open Road is not the sort of documentary I would normally have chosen to watch. But it showed up in a package of other review DVDs, and I thought I’d give it a go. I’m very glad I did.

Wide Open Road is more that just a history of cars. We do get the history of the machines and their makers, but we also get a social history of Australia through its obsession with the automobile. Why did certain types of people buy certain types of cars? Why was there a rivalry between not just Holden and Ford, but Holden drivers and Ford drivers? Why were Australians obsessed with speed? How did the country itself influence its people’s relationship with the car?

Although this documentary romanticises the image of the car, it doesn’t ignore the harsher negative aspects of Australians’ obsession with speed. For me, the most interesting part of the series was the look at the road toll, it’s causes and people’s attitudes towards it — the fact that at one point Australia had a higher road toll than any other country; and that drinking and driving were two things so ingrained in our culture that many people thought nothing of combining the two. Then the introduction of random breath testing and the way that some people saw it as an infringement of their civil liberties. Fascinating stuff! The presence of renowned historian Graeme Davison (author of Car Wars: How the car won our hearts and conquered our cities) as an advisor probably has a lot to do with the comprehensive historical approach of the series.

One of the things that struck me about this series was the extensive use of archival footage and photographs. The film-makers have dug up some really interesting stuff. They’ve combined this with some re-enactment material (which they approach with a nice sense of humour) and lots of interviews. These interviews include historians, politicians, celebrities and people from the motoring industry — a good mix.

The documentary is divided into three episodes based on era. Episode 1, “Here Come the Petrol Heads”, looks at the early years. Episode 2, “Dream Machines”, concentrates on the 1950s and 60s. Episode 3, “Car Wars”, goes from the 1970s to the present day. There is passing reference to the future… but I really would have liked to see more about where things are heading. The series could easily have supported a fourth episode focussing on environmental issues and research into hybrid and electric cars.

The series has been released as a two-disc set with a nice batch of extras — mostly extended interviews with the people who appeared in the doco. But there’s also a segment from the ABC’s 1970s car show Torque.

As a non-rev-head, I found this series an interesting and enjoyable look at Australia’s relationship with the car. I’m guessing that rev-heads would love this doco even more.

Wide Open Road is released on DVD in Australia by Roadshow.