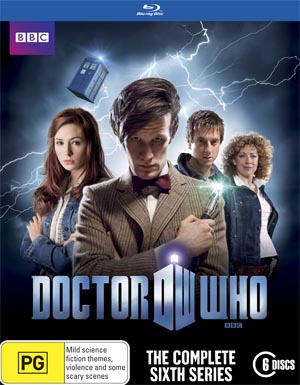 Series 6 has previously been releases in two sets. But these were the vanilla sets — fine for the casual viewer, but definitely not enough for the die-hard fans. The 2010 Christmas Special has also previously had a vanilla release. Now we have the complete series six box-set, including that Christmas Special, chock-full of extras. I’ve already reviewed the individual episodes (see “A Christmas Carole”, Series 6 Part 1 and Series 6 Part 2), so in this review I’ll concentrate on the season as a whole and the additional material in the set.

As with most seasons of Doctor Who, this one was a mixed bag of varying quality. We had some good eps (“The Impossible Astronaut / Day of the Moon”, “The Rebel Flesh / The Almost People”, “The Girl Who Waited”, “The God Complex”, ) and some pretty average eps (“Night Terrors”, “The Wedding of River Song”); we had a couple of brilliant eps (“The Doctor’s Wife” and “A Good Man Goes to War”) and we had some stinkers (“The Curse of the Black Spot”, “Let’s Kill Hitler”, “Closing Time”). This is all well and good. It’s rare for a long-running series to maintain quality over every episode, and even the not so great episodes in this series still have a lot going for them — it’s all relative. While I may class “The Curse of the Black Spot” as a stinker in this review, that is in comparison with other Doctor Who episodes, not with other television shows. These so-called stinkers are still better than most other televised offerings. (refer to my previous post “My Doctor Who Philosophy”)

I found this season, as a whole, to be a little disappointing — mostly because it promised so much, but then failed to deliver. That’s not in terms of individual episodes, but rather in terms of the season story-arc.

Historically, Doctor Who has not been an arc-based series. Although there have been a few story-arcs in the classic series (most notably The Key to Time season), the arc-based season was introduced as a regular feature by Russell T Davies with the first season of the series revival. Davies kept his story arcs fairly subtle and unobtrusive — it was more a case of peppering the earlier episodes with hints leading up to the season finale. It’s not until Steven Moffat takes over with Series 5 that we get a full-on, season-long arc that intrudes on the individual stories.

And I don’t think it works all that well. I didn’t care for it in Series 5, because it was not fully resolved. With Series 6 he’s given us an incredibly convoluted arc that is again not fully resolved. And much of what is resolved doesn’t quite gel. It feels a bit like he’s included lots of stuff along the way that he thinks is cool (and it is), but then he’s painted himself into a corner and had to find ways of making it all make sense (and it just doesn’t).

For me, the arc highlight was the mid-season finale, “A Good Man Goes to War”. It provides resolution on certain points and then makes promises for further resolutions, which are not delivered on in the season finale, “The Wedding of River Song”. One of the things I loved about “A Good Man Goes to War”, was that the Doctor finally had to face the consequences of his increasingly in-your-face hero complex. But “The Wedding of River Song” was all about him escaping those consequences. At least, this final episode provides some hope for the future, as the Doctor himself explains…

“I got too big, Dorium. Too noisy. Time to step back into the shadows.”

Hopefully, this means that in Series 7 we see a return to more individual plots and a less convoluted arc. But then again, that final episode has still left story threads hanging.

It’s been interesting to watch the Doctor and his companions develop over the course of the season. Matt Smith has really delivered a complex and multi-layer performance — he can convey so much with just a look. I think he is at his best when playing the darker elements of the Doctor’s character, and at his weakest with the comedic elements, which he tends to over-play a touch. I’ve never really cared for Amy. I find her the most annoying of the new series companions. However, she’s less annoying this season than in the previous — probably because she’s given a little more substance and development in the scripts, particularly “The Girl Who Waited” and “A Good Man Goes to War”.

But I think that it is Rory who fairs best. His development has been excellent. He has gone from a slightly awkward comedy relief, to a man of unwavering love and unflinching loyalty — for his wife, but not the Doctor. As we see in “The God Complex” he has doubts about the Doctor. I love the fact that in “The Wedding of River Song” he goes from nurse to warrior, while the Sontaran does the reverse. Despite this, Rory never loses his caring nature. He’s an excellent companion and does well to temper the more annoying aspects of Amy.

The big flaw in both Amy and Rory’s characterisation, however, is how quickly they seem to get over their daughter’s kidnapping. As a parent myself, I found this completely unrealistic.

All up, despite my criticism and reservations, Series 6 does have a lot of great stuff to offer viewers. Under Moffat’s guiding hand, Doctor Who has taken on an epic quality and very filmic visual language. When it hits the highpoints, it is quite breathtaking!

Now, on to the actual Blu-ray release…

I have to start by saying it looks AWESOME on Blu-ray. With the high def image you can actually see the weave in the Doctor’s jacket. I was blown away by the crystal clear quality.

Lots of extras on these discs. The short Monster File docos from the vanilla release are included, and we have shortened versions of the Doctor Who Confidential series of documentaries. It’s rather odd that they are, as with previous releases, included in cut-down versions. This set is obviously aimed at fans, and fans tend to be complete-ists, so not having the complete version of these documentaries is frustrating.

There are commentaries on five of the episodes, although only two of them manage to get above mildly interesting. Firstly, Neil Gaiman’s solo commentary on “The Doctor’s Wife”, is jam-packed full of interesting info. Secondly, the commentary on “The Wedding of River Song”, features Moffat, the episode’s director (Jeremy Webb) and Frances Barber, who plays Madam Kovarian. These three seem to have a real chemistry and manage to deliver a lively, entertaining, informative and funny commentary. The highlight for me was when Moffat was discussing the revelations and the lack of resolutions, saying…

“It’s almost like I went all this way and didn’t tell you anything at all.”

The other three commentaries lack any sort of spark and are, at times, a little boring. There is almost a sense that the commentators are toeing the party line — no one criticises anything and everything is always ‘brilliant’.

But wait… there are even more extras. The discs include the five prequel scenes that were released on the web prior to selected episodes and the two Comic Relief scenes. AND there’s also a set of five new mini-eps collectively called “Night and The Doctor”. The first two deal with the Doctor’s relationship with Amy and the second two deal with his relationship with River Song. All four are quite clever and insightful. The fifth appears more like a prequel scene for “Closing Time”.

This is a six-disc set, presented in a standard plastic Blu-ray case, held within a cardboard slipcase. The discs are accompanied by a foldout pamphlet with some pictures and a list of contents. Annoyingly, the list simply tells you which episodes have commentaries, without actually saying who is doing them.

All up, this is a very good release. I’ve reviewed the standard Blu-ray set. But it’s also available on DVD, and there is also a ‘limited edition’ on both DVD and Blu-ray — the only difference, as far as I can tell, is snazzier packaging.