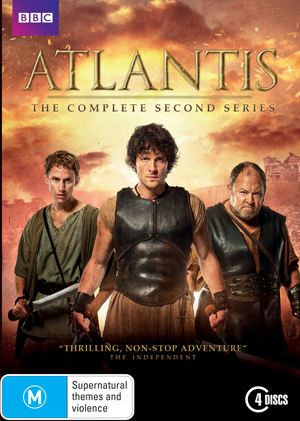 Things have changed in Atlantis! The second season of this British fantasy series is a huge shift of direction, both in terms of story and style. It’s not better or worse… just difference. And certainly not quite the family show it once was.

Series One (see review) followed the adeventures of Jason, Hercules and Pythagoras in the mythical city of Atlantis, ruled by King Minos. The king’s wife Pasiphae schemed against her husband, while his daughter Ariadne pined for Jason. In Series Two, King Minos is dead and Pasiphae is all set to invade Atlantis and wrench it away from Ariadne. Series Two sees a change in terms of story direction with a struggle between Pasiphae and Ariadne (and Jason) for control of Atlantis. The stories are all focused on this struggle, as well as the personal struggle between Pasipahe and Jason, rather than on other external episodic elements (such as the Minotaur, the Maenads in the first season). The stories are darker, grimmer and definitely a little less family orientated. Romance has a rocky road this season for the four leads. Jason and Ariadne face one problem after another, Hercules attempts to continue his doomed romance with Medusa and Pythagoras gets off to a rocky start with Icarus. It seems like no one is destined for happiness.

The look and feel of the series has changed as well. The stylised (mostly bloodless) fighting with interspersed slow-mo, is replaced by a gritty, shaky-cam approach. The violence level is upped and everything is just that little bit more bloodthirsty. The silliness and humour is toned down a notch or two. All up, it feels a lot less like The Adventures of Merlin. (see review)

The four principal cast members (Jack Donnelly, Mark Addy, Robert Emms and Aiysha Hart) return, as does Sarah Parish as main villain, Pasiphae. The supporting cast changes around a bit this season. Obviously Alexander Siddig (King Minos) is absent, but we also loose a few others as the season progresses (can’t tell you who without spoilers). But we gain a few new ones — Amy Manson as Pasiphae’s niece Medea, Peter De Jersey as Pasiphae’s military leader Goran, Lorcan Cranitch as the scheming courtier Cilix, Anya Taylor-Joy as Cassandra and Joseph Timms as Icarus (and yes, he does briefly get wings). And it’s good to see John Hannah return for a couple of eps as Jason’s daddy.

Even with the shift in style, Atlantis continues to be a good-looking show with high production values. The writing is better this time around — more dramatic and a little less clichéd — although still suffers from a lack of attention to detail.

Series Two ends with a massive set-up for a third season, which would have seen Jason and his friends set out on the Argo in search of the golden fleece. Would have… if the BBC had not cancelled the show. And so things come to a close for Atlantis. It was never a brilliant or ground-breaking series, but it was interesting and entertaining. I guess I’ll miss it a bit, but I won’t be shedding any tears.

The four-disc DVD release is light-on for extras with just one 22-minute doco. No idea what the packaging is like, as my review discs were naked. 🙂

Atlantis: The Complete Second Series is released on DVD and Blu-ray in Australia by Roadshow.