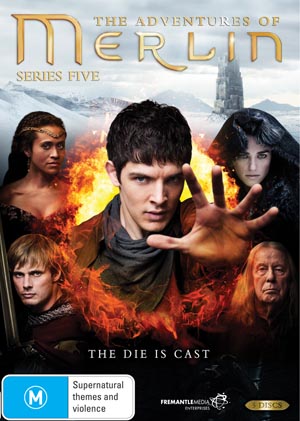 The BBC fantasy series The Adventures of Merlin returns for a fifth and final season of 13-episodes. Questions are resolved, characters progress, secrets are revealed, and the epic story is brought to a satisfying conclusion.

This season is set three years after the last (see my review). Things have moved forward in Camelot since Uther’s death. The round table is now in place, Arthur and Guinevere are happily married and the Kingdom is enjoying a time of prosperity. But, of course, Morgana is still plotting away to kill Arthur and take Camelot. Mordred makes a return visit, all grown up and wanting to become a knight. And Merlin is still keeping his magic a secret from Arthur. Add to this a prophecy that Mordred will kill Arthur at Camlann. Great stuff!

As with previous seasons, this one takes some of its cues from established Arthurian legend, while adding new elements. Some old plot devices are rehashed in new guises, but there is enough freshness to keep the momentum going until the end. It’s great to see the producers make the decision to end the series with a definite conclusion now, rather than stringing it out beyond its use-by date. The ending itself is appropriate and satisfying. It makes the five-year journey very worthwhile.

Colin Morgan really gets to shine as Merlin in this season, with some great dramatic moments as well as lots of humour. His strength as an actor is particularly evident in his ability to perform convincingly under heavy aging makeup. This time around he gets to be an old woman as well as an old man (very chuckle-worthy). Unfortunately we also get to see the limitations of Katie McGrath as an actress. When Morgana is aged, her performance is really quite unconvincing.

As with past seasons there is a lack of attention to detail in the scripting, particularly with characters making inconsistent decisions from episode to episode. It’s not as bad as in season 4, but it is still there and occasionally detracts from an otherwise good set of episodes. And I get the feeling that few of the scriptwriters have come to grips with the geography — journeys are inconsistent in length, depending on the requirements of the individual plots and who is making them. Morgana seems particularly speedy in her travels. But these problems are relatively minor and forgivable. The season as a whole is well handled.

The DVD release is excellent, with commentaries, a making-of doco, out-takes and deleted scenes. There are also some appallingly bad fan vids. Not sure why they bothered with these.

On the whole, I really enjoyed this season.

The Adventures of Merlin: Series Five is released on DVD in Australia by Roadshow Entertainment.