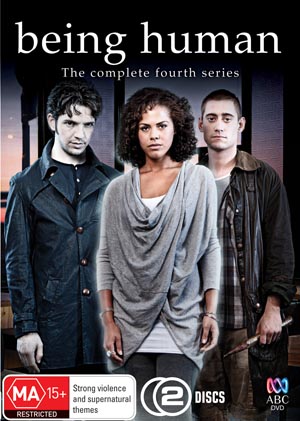 A werewolf, a vampire and a ghost move in together. That was the original basis of the British series Being Human. Each of the first three seasons was unique in it own way, changing tone and direction. (see review) But this latest season really mixes things up.

Season three ended with the death of Mitchell, the vampire of our trio, and the announcement of the imminent arrival of ‘The Old Ones’ — the leaders of all vampires. Things have taken a jump forward since then. Nina is dead and George rather obsessed with keeping his daughter Eve under his watchful eye. Pretty soon he’s dead too and Eve is left in the care of Annie (the ghost), Tom (a young werewolf introduced last season), and a new vampire, Hal.

This season centres around a prophecy proclaiming Eve to be the War Child, the one destined to destroy the vampires, and the arrival of The Old Ones. We get a bit of a glimpse into a future world, were humanity is losing a war against the vampires. Annie is given a mission she really doesn’t want. And we discover that there is more to Hal than first appears. And then, the whole thing ends with a setup for more changes to come.

I’m still not one hundred percent sure what I thought of this season. It is a little episodic at times, despite the season arc. There is a return to quirky humour, although perhaps a little too much at times. But the last couple of episodes are extremely good — dark and riveting.

Annie (played by Lenora Crichlow) is my least favourite character of the original trio, so I was disappointed that she was the only one left. Having said that, she has a good story arc this time around. I miss George (Russell Tovey), with Tom (Michael Socha) not really filling his shoes all that well. But I do like Hal (Damien Molony) — a much more interesting and complex vampire than Mitchell (Aidan Turner). In terms of guest cast, Mark Gatiss steals the show as Mr Snow, leader of The Old Ones. A calm and chilling performance. And Mark Williams is rather amusing as Regus, the vampire recorder.

The DVD release is very disappointing, with absolutely no extra features. Not happy about that!

Being Human: The Complete Fourth Series is released on DVD in Australia by Roadshow Entertainment.