DVD Review — Doctor Who: Death to the Daleks 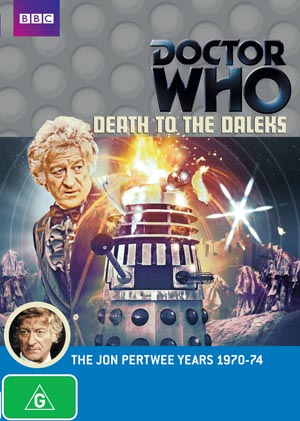 “Death to the Daleks” is a four-part story from the eleventh season of the classic Doctor Who series, originally screened in 1974. Although there is an interesting concept at its core, and some good elements to the story and production, it is hampered by a lack of logic and some pretty daft moments.

The Doctor and Sarah Jane Smith are forced to land on the planet Exxilon as the TARDIS is mysteriously drained of all power. Here they encounter superstitious natives, an intelligent city and a stranded Earth expedition, also drained of power. The Earth expedition has come to the planet to mine parrinium, which is desperately needed as an antidote to a plague that is sweeping the galaxy. Pretty soon the Daleks arrive, wanting the parrinium for their own plans. But they too fall foul of the power drain, their weapons and spaceship rendered useless. So the Daleks end up having to join forces with the humans to mine the parrinium and try to work out how to stop the power drain. But being the sneaky little devils that they are, the Daleks fit themselves with old-fashioned guns that fire bullets, and are soon menacing everyone.

The basic concept of the story, the plague, the antidote, the power loss, etc, is really good. But the plot itself is poorly thought through. The power drain seems rather subjective. The TARDIS loses power, as do the spaceships, and torches and Dalek energy weapons and everything… except the Daleks themselves… oh, and their spaceship door. There is a half-hearted, throw-away line that attempts to explain this, but it doesn’t wash. Then there is the all-powerful, intelligent super-computer city… which can be broken into by passing a few logic tests. It just doesn’t’ make sense!

Then there are the Daleks themselves. They are looking a little wobbly and far from threatening. And there are only three that can move about. It’s rather amusing to see the fourth Dalek sitting in the background of shots, unmoving. There is a ridiculous scene where one Dalek self-destructs because a prisoner has escaped. Why? And why is this story called “Death to the Daleks”? The title has obviously been chosen as a sensational attempt to drawn in viewers rather than having anything to do with the actually story. But it is interesting to see how the Daleks deal with being weaponless, necessitating a temporary truce with the humans.

The production design varies considerably. The Exxilon natives are great, while the city is not so good. The city’s mechanical ‘root’ looks good but the wires operating it are clearly visible. The location shooting is good, with some nice stunt work. The music, by Carey Blyton, is extremely annoying! Jon Pertwee as the Doctor and Elisabeth Sladen as Sarah Jane are great, each of them throwing themselves into their respective roles. The guest cast are adequate but nothing special.

There are individual moments that are gold. The Daleks, for instance, testing out their new weapons by shooting at a model of the TARDIS. I love it!

“Death to the Daleks” is an odd mix of good and bad. Although an entertaining watch despite its problems, this one is more for the fans than the casual viewers.

The DVD release is good, with an interesting commentary featuring a variety of people, and some good behind-the-scenes stuff. Oddly, one of the extras is about the 1960s Dalek feature films.

Doctor Who: Death to the Daleks is released in Australia on DVD by Roadshow Entertainment.

DVD Review — Being Human: The Complete Fourth Series Launching Trust Me Too