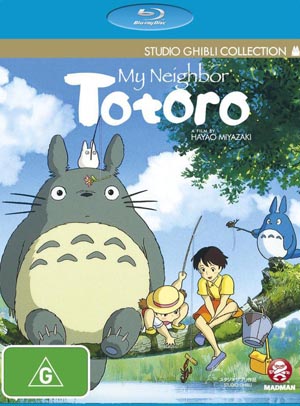 There are some films that you never tire of watching, no matter how many times you have viewed them. For me, My Neighbor Totoro is one such film. Having watched and re-watched it on DVD, it is a pure joy to now be able to enjoy it on Blu-ray.

My Neighbor Totoro is an animated children’s film from Japan’s Studio Ghibli, directed by the legendary Hayao Miyazaki. It is one of the most beautiful animated films ever made, rivalled only by Miyazaki’s Spirited Away.

It is a very simple story about two young girls who move out to the country with their father, so as to be closer to the hospital where their mother is convalescing. As they explore the house and surrounding countryside, the girls discover a forest spirit named Totoro. That’s basically it in terms of plot. And yet it is pure magic, every scene a discovery, every moment a visual feast. It is gentle and spiritual and sensitive. It doesn’t feel the need to explain everything, as is common practice with western animation. The relationships between the main characters are beautifully written and often conveyed without dialogue. In fact, there are many quiet, serene moments in the film, sometimes without even music.

Lots of great extra features on this release, with behind-the-scenes stuff and interviews.

My Neighbor Totoro is released on Blu-ray in Australia by Madman.

AWARDS NEWS
Viewing Clutter has been shortlisted for a Chronos Award in the category of “Best Fan Publication”. All members of the Continuum convention are eligible to vote. Or you can purchase a voting membership for $5 if you feel so inclined. More info…
http://continuum.org.au/c9/chronos-awards/2012-chronos-award-nominees-and-ballot/

DVD Review — The Mystery of Edwin Drood Anthologies — the new, the old and the foreign