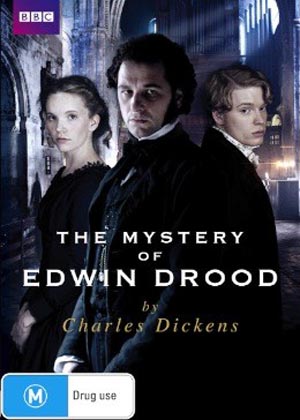 Here’s another BBC costume drama based on a book by Charles Dickens. While certainly lavish and well produced, as you would expect from the BBC, The Mystery of Edwin Drood doesn’t quite meet (great) expectations.

The story revolves around Edwin Drood, a young man betrothed to Rosa Bud. His uncle, John Jasper is also in love with Rosa and has opium induced dreams of murdering Edwin and marrying the girl. Then there is the further mystery of Edwin’s father, Captain Drood, who supposedly died abroad. Throw in some illegitimate children, some bigoted parochial parishioners and a suspected murder, and you have a convoluted plot somehow squeezed into only two episodes.

The whole thing is rather uneven, perhaps because it is based on an unfinished novel (Dickens died)… the scriptwriter had to make up the entire conclusion. The two episodes feel very different, with the first being a slow-moving setup and the second a more fast-paced murder mystery. None of the main characters are particularly likeable or engaging, although they are quite ably played by the actors concerned. Thankfully the supporting characters are considerably more interesting — particularly Mr Grewgious the lawyer, his clerk Bazzard, and Durdles the cemetery caretaker.

This is certainly a good looking, well-produced drama, but I found it lacking in engagement.

Not much in terms of extra features, I’m afraid. Nothing about the production or costumes or recreation of the period, as you would hope for. Instead we are given a none-to-exciting doco about Mr Dickens and his books. If you’re curious about this series or a Dickens fan or an aficionado of BBC costume dramas, by all means, check it out… but I’d recommend borrowing it from the DVD library rather than purchasing it.

The Mystery of Edwin Drood is released in Australia on DVD by Roadshow Entertainment.