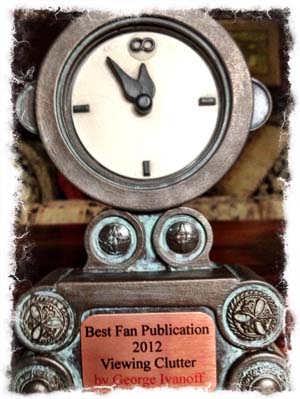 The Chronos Awards were set up to honour achievement in the area of speculative fiction by Victorian writers and artists. They are divided into professional awards and fan awards. Each year they are presented at the Continuum spec fic and pop culture convention. This year’s awards were presented on 7 June at Continuum 9.

And, I’m very pleased to report, that Viewing Clutter won the award for Best Fan Publication. 🙂

Although I am a professional writer, Viewing Clutter is a labour of love. I don’t get paid for writing the reviews… which is why the posts are sometimes sporadic. I write them in my spare time around and between my paid writing. The giveaway DVDs and Blu-ray discs are all very kindly provided by Roadshow Entertainment, but I pay for postage when they are sent out to winners. I do all this because I love DVDs and Blu-rays (you might even say I’m a little obsessed), and because I’m a fan of the types of films and TV shows I review (mostly sci-fi, fantasy and costume drama, with a heavy emphasis on Doctor Who… have I mentioned that Doctor Who is the greatest television series ever made?).

If you’d like to know a little more about Continuum 9, check out the recent post on my writing blog.

Finally, I have to say a HUGE thank you to Madman and Roadshow Entertainment for continuing to support this blog by providing review discs. Without them, there would be no blog.

Now… time to get back to some reviewing.  🙂