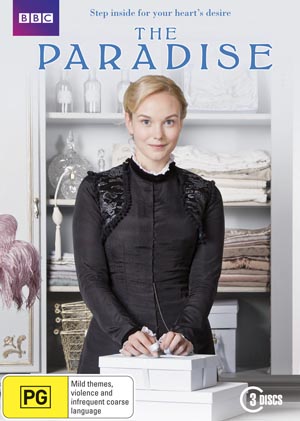 More costume drama goodness from the BBC. Yay! The Paradise is a lavish spectacle of life, love and melodrama set against the backdrop of England’s first department store in 1875.

Loosely based on Émile Zola’s novel Au Bonheur des Dames (The Ladies’ Paradise), this eight episode series transports the action from Paris to London. Entrepreneur John Moray (Emun Elliott) has established the city’s first department store — The Paradise. A young lady, Denise (Joanna Vanderham), comes from the country to work in her uncle’s dressmaking store, only to discover there is not enough work for her, as competition from The Paradise is making things very difficult for the small traders in the area. So off she goes to The Paradise and gets a job in the ladies wear department. Much romance, drama and unrequited love follow, with a little bit of mystery and murder thrown in for good measure.

The Paradise is wonderful to look at. The sets are beautiful and the costumes are gorgeous. But what really sells the show are the characters. It is so easy to get caught up in the lives and loves of these sometimes soapy people — from the enigmatic Moray, with the mystery of his dead wife hanging over him, to the naive Denise, eager to make something of herself. Although some characters may appear as stereotypes when you first meet them, the series manages to give each and every one of them some depth and development. Miss Audrey, head of ladies wear, for example, wonderfully played by Sarah Lancashire. A prim and proper exterior hides a background of lost love and a fear of ageing and becoming redundant.

The series has an open-ended conclusion, so I am hoping there will be more to come.

A light and easy watch, The Paradise would make a great introduction to viewers who are not really into costume drama. But the lovely characterisation and brilliant production values make it equally appealing for seasoned viewers of the genre. Highly recommended!

The DVD release is adequate. No commentary, and only one extra — “Behind the Doors of The Paradise”. But it is a rather good behind-the-scenes doco.