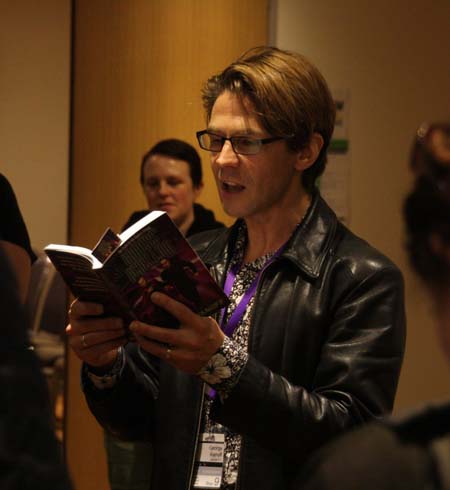 Last weekend I attended Continuum 9. Like those that went before it, this convention was awesome. Lots of great panels, so many interesting discussions and a really friendly, engaging vibe. For me, personally, it was special for a number of reasons.

Firstly, I got to launch my new novel, Gamers’ Rebellion (third book in the Gamers series). It had already been launched at a schools literary festival, but now I had the chance to unleash it onto the spec fic community. Many thanks to friend and fellow author Narrelle M Harris for launching the book. I felt very flattered by her lovely speech. A video of the event will be coming soon.

Secondly, I got the chance to talk about Doctor Who… a lot! Highlights include “Silence in the Library”, a panel about non-fic and critique books about Doctor Who; and the podcast recording of Splendid Chaps. Hosted by John Richards and Ben Mackenzie, Splendid Chaps is a series of live podcast recordings discussing various aspects of Doctor Who. Despite a shocker of a headache, I still managed to enjoy the recording, chatting about spoilers and cliffhangers.

Thirdly… I got to wear a Doctor Who TARDIS jacket. My wonderful wife Kerri made it for me. I wore it at the Splendid Chaps recording and at numerous other panels. And very soon, that jacket (and me) will be featured in a newspaper article. 🙂

As well as speaking on a number of other panels over the course of the weekend, covering everything from my latest writing work to the publishing industry in Australia, I also hosted SFQI, a spec fic version of Stephen Fry’s much loved comedy quiz show. The panelists were Narrelle M Harris, John Richards, Ben Mackenzie and Grant Watson. You couldn’t wish for better, more entertaining group of panelists. Thanks to them, SFQI was heaps of fun! 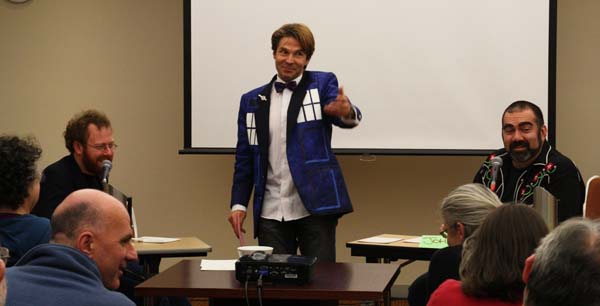 Oh, and then there was The Great Debate. Topic: Public transport is more exciting than space travel. I was opening speaker for the affirmative. NK Jemisin, the convention’s international Guest of Honour, was also on the affirmative, with Australian Guest of Honour Paul Collins speaking for the negative. The focus was very much on entertainment rather than serious debate… a goal that each of the speakers managed to achieve.

Finally, there were the Guests of Honour. They were both great speakers and ran interesting and inspiring sessions. Paul Collins coupled his speech with a writing workshop that was brilliant fun, while NK Jemisin delivered a truly inspiring speech (go read it RIGHT NOW). I’ve never read NK’s stuff, but after meeting her, listening to her speak and chatting with her over a kangaroo steak dinner, I’ll definitely be seeking out her work.

Photo of Splendid Chaps podcast by Tehani Wessely. All other photos in this post by Adam Edmonds.