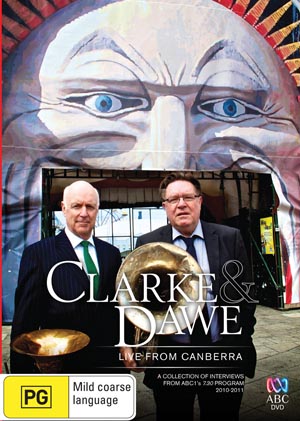 I’m taking a short break as I hand over the reins of this post to fellow scribe, Mackenzie Oliphant. Take it away, Mackenzie…

There is no doubt that most, if not all, of our politicians can be – and are frequently – obtuse, illogical, unreasonable and, quite frankly, very silly.  You only have to turn on a television or glance sideways at a newspaper to discover a seemingly unending series of actions or comments by our political leaders that makes even the least political-minded of us shake our heads. This then, is the rich feeding ground for the ABC’s infamous comic wits, John Clarke and Bryan Dawe from the 7.30 program.

Covering events from the years 2010-2011, this DVD produces a month-by-month selection of the duo’s most biting political commentary, enveloped by a wit delivered with the dryness of a rice cracker.

Eschewing shallow impersonations, costumes and settings, Clarke and Dawe frame all of their skits in the same format of question and answer – a pseudo interview or the mock quiz format of a Mastermind contest. By thus casting off the regalia of theatrics (possibly due to the limited ABC budget they work under), what is being said becomes as important as the way it is said. Delivery, timing and an eye for the ridiculous political position are the mainstays of this DVD selection.

The Mastermind format is used brilliantly in a skit about the carbon tax, demonstrating how little the public actually know about it, and highlighting how easily the opposition has high-jacked the debate about the environment. Clarke’s deadpan responses wonderfully pillory Tony Abbot’s lack of understanding of carbon emissions while Bryan Dawe’s relentless questions perfectly reflect the ordinary Australian’s puzzlment. Alas, Abbot is something of an easy target, given how often such interviews with the man, himself end up being the life that imitates Clarke & Dawe’s art.

But Abbot is not the only target of Clarke & Dawe’s humour. Julia Gillard’s position on asylum seekers is neatly hung, drawn and quartered.  In another skit, a well-aimed dart is thrown squarely at the Qantas monopoly and Australian media ownership.

The most telling, and easily the most amusing skit takes the form on an interview with a ‘health professional’ whose name is neatly punned and whose job it is to warn Australia of a growing health issue – a virus known as Coalitionitis.

While there is no doubt about the cleverness of Clarke & Dawe’s take on Australian politics, this DVD suffers from a kind of time delay. Too much of their subject matter is very much in the moment, but by the time you watch the DVD, the events are a year and more in the past and it can be difficult trying to remember the details being referred to. Without those details, some of the humour goes missing, which is a shame. The great guts of political satire is always a timely – and biting – delivery. While Clarke & Dawe have the latter, on this DVD, the former goes a little wanting.

George’s bit at the end

Many thanks to Mackenzie for the review. If you’d like to find out a little more about Mackenzie and her writing, check out her website, as well as her two blogs — A Big Beautiful World and A Short Open Letter To…

Clarke & Dawe: Live from Canberra is released on DVD in Australia by Roadshow Entertainment.

In the news with TRUST ME TOO Blu-ray Review — Arrietty