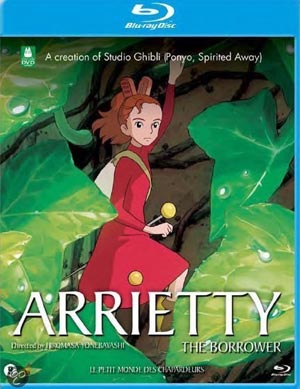 Japan’s Studio Ghibli has a reputation for producing some of the world’s best animated films. I have adored their previous efforts and so approached their latest, Arrietty, with eagerness. A little different from their other films, it still manages to delivery excellence on all fronts.

Arrietty is based on Mary Norton’s children’s book, The Borrowers. The Borrowers are a race of miniature people who survive by acquiring their needs (“borrowing”) from normal sized humans. They live in secret and endeavour to never be seen by humans, who they fear will kill or capture them. An ill young boy, Sho, and his mother come to live in an old country house, where a family of Borrowers also reside. It’s not long before Sho see Arrietty, a young Borrower girl… and the two begin to form a bond.

Visually, Arrietty is pure Ghibli — an absolute joy to watch, especially on hi-def Blu-ray. The animation really is stunningly beautiful.

I’ve not read The Borrowers, but I’m told the film is a good adaptation. But in terms of story, I found it quite different from other Ghibli films. There is an absence of background complexity and mythology that you usually get in a Ghibli film — even in the films with the simplest of plots, such as My Neighbor Totoro. Nevertheless, the story is engaging, the characters likeable and the overall effect is entertaining.

The voices in the English dub are mostly well cast, with Olivia Colman as Homily (Arrietty’s mother) being the only one that didn’t sound quite right to me. It’s interesting to note that there is also a US dub of the film in existence (The Secret World of Arrietty), with a completely different set of voice actors, in which some of the character names have been changed — Shawn instead of Sho, for instance.

The Blu-ray release is excellent, with lots of extra features to keep avid viewers entranced long after the film has finished.

Arrietty is released on Blu-ray and DVD in Australia by Madman.